Rally in the cold: Signs and songs 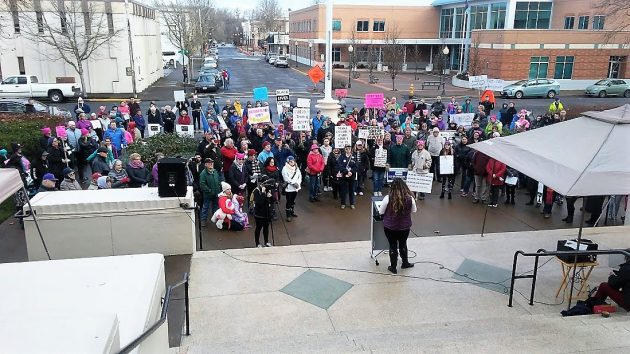 The group listened to several speakers, and they also broke into song.

On my Saturday ride through town I chanced upon this rally in front of the Linn County Courthouse, one of many across the country inspired more or less by opposition to the Trump administration’s policies and displeasure with the president himself.

I took a few photos, but I didn’t stick around. It was cold and windy, and I wanted to keep moving. So after picking up a handout of song lyrics — one number was attributed to the “Resistance Revival Chorus” —  I took off.

At the time the speaker’s theme, I gathered, was the controversy over the people who were children when their parents brought them to this country illegally. “We’re all immigrants,” read one of the picket signs in the crowd, factually faulty since most of the 320 million or so inhabitants of America were born in this country, and many of the actual immigrants did their immigrating by following the law.

Still, it does seem puzzling that a reasonable solution for the “DACA” cohort (“Deferred Action on Childhood Arrivals”) has proved so hard to achieve. It would clearly be unreasonable to force all those people, who don’t have a country other than this one, to go somewhere else. The solution is for Congress to pass — rather than have the president decree, as was done by Obama — some kind of DACA program and provide a way for the people affected to work toward citizenship by taking certain steps.

There were plenty of other picket signs. Some fairly invited a comeback. For instance:

“Make America care about facts again.” Again? Did we ever care about facts? Seems to me that often propaganda and emotion steered events as far back as you care to look.

“Nothing great about hate.” Who said there was?

“Together we rise.” Maybe, unless we all screw up and together we fall.

My favorite: “I think, therefore I am.” Hard to improve on this dictum, which is just as clever today as when René Descartes wrote “cogito ergo sum” in 1637.

There were a couple of signs I hesitate to quote. What they showed is that some of his critics are no more dedicated to etiquette in language than the president they mock. (hh) 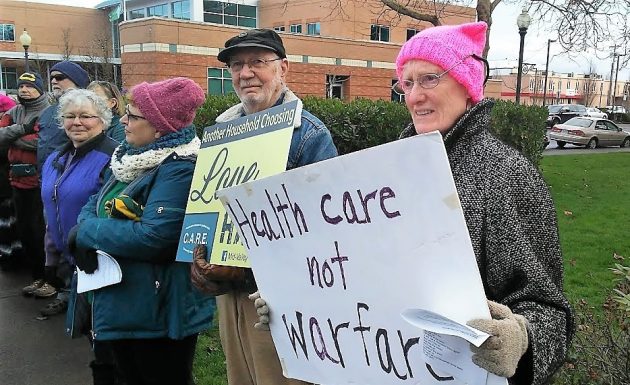 Safe to say that “unpaid” applied to everybody who showed up.


10 responses to “Rally in the cold: Signs and songs”