If the crossing arms come down just before you get to the tracks on North Albany Road, you get about three minutes to contemplate the paint on the boxcars as a short Albany-bound freight goes by. This may lead to idle questions.

Such as: Do the taggers want you to read and understand what they go to a lot of trouble to paint on the sides of the cars? If so, they could do a better job. Much of their work takes some deciphering. They are not using standard fonts, after all. And even at the slow speed of a Portland & Western freight, motorists stopped at a crossing have only a second or two before one image is gone and the next one slides into view.

Another thing: Some of the stuff on the cars is pretty old. It looks that way anyway. So obviously some of these cars haven’t been repainted since they belonged to the Southern Pacific, which ceased to exist in 1996.

Somewhere I read that repainting the two sides of a boxcar costs around $1,000. And a repainted car would just give the taggers a new blank canvas. No wonder the railroads don’t spend money on paint.

Looking at the cars as the train goes by, you get the feeling that the graffiti artists are not overly tall. Their pieces go up the walls only about as far as an average-size person wielding a spray can or roller can reach.

Now and then there’s an exception to the apparent height limit. Did some ambitious vandal/artist lug a ladder into some rail yard at night, hoping that no one would spot the unusual sight?

On the bike the other day, I had just crossed the Union Pacific mainline on the footpath that is Burkhart Street in Albany when a UP freight came roaring down the line, heading north. This was a long, long line of covered hopper cars. And look: Not a single graffiti on any of them as far as the eye can see. What makes them immune? 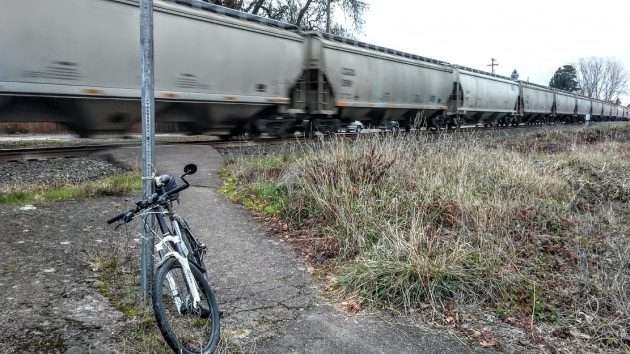 All the hopper cars on this Union Pacific freight, shown Nov. 30, are free of unauthorized paint.