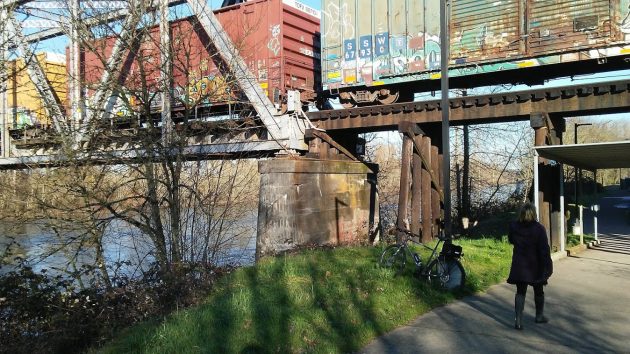 A walker on the Dave Clark Path crosses under a Portland & Western freight on Tuesday afternoon.

Watching a freight train crossing the river on the “Toledo District Willamette Bridge” on Tuesday made me realize something: This is a big anniversary year for that steel structure spanning the river at Albany. It was built 100 years ago, in 1921.

I was reminded of this when I looked up and saw “1921” cut into the cross beam facing the south bank. The year never seemed that ancient when I saw it before. Now it does.

Online sources say the bridge was built for the Southern Pacific by the American Bridge Company of New York. They also give fascinating details, such as that the main span is 260 feet long and the entire structure measures 3,910 feet.

It was built as a swing bridge. The center span was meant to rotate on a pivot to accommodate river shipping. The era of paddle wheelers on the Willamette was pretty much over by the 1920s, so it’s hard to see now why the swing span was put in.

I don’t know if the bridge has ever been opened for a passing vessel. Now it can’t be, as you can see just by looking at it.

This was not the first railroad bridge at this spot. Several photos in the late Bob Potts’s “Remembering When” books show a rail bridge there as early as 1888.

The Toledo District or branch line is operated today by the Portland & Western shortline railroad. As far as I know the line’s owner is still the Union Pacific, which absorbed the Southern Pacific in 1996.

In a town like Albany, 100-year anniversaries come and go. Still, we might take a moment, consider this railroad bridge and reflect on how they used to build big things to last.

And while you’re doing that, take a look at the short video below. (hh)