Quiet zones in Albany: Better not 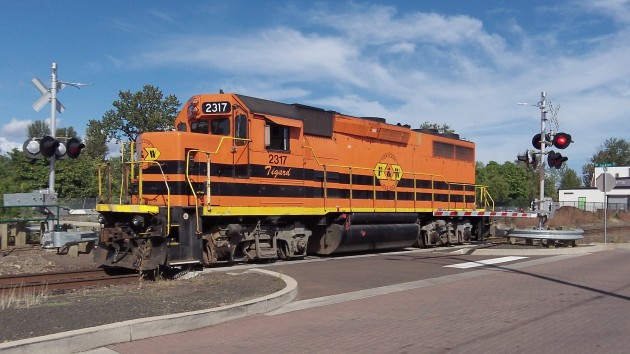 Albany has been a railroad town since 1870. Some people don’t like the sound of that. Train horns at crossings bother them. But turning the entire city into a “quiet zone” might cost in the neighborhood of $14 million.

That’s the conclusion the city staff has drawn after looking into a citizen’s request to keep engineers from sounding their horns as they rumble through town. On the website of ODOT-Rail they discovered that “the train horns can be silenced only when other safety measures compensate for the absence of the horns.” They learned that new quiet zones where train horns are silenced must be at least half a mile long and every public street crossing must have flashing lights and automatic gates.

But also, before communities can establish quiet zones, they must work with state and federal rail authorities to study the risk of collisions and determine what else might be required to prevent train-vehicle crashes. Possible safety measures include raised medians to keep drivers from going around the gates, and converting two-way streets to one way.

As it turns out, the three railroads running in and through Albany operate up to 57 trains a day on four separate corridors, led by 26 daily freights and six passenger trains on the Union Pacific’s main line. (The total seems a little high, but that’s what it said in a memo prepared for a regional transportation plan.) There are 29 grade crossings in Albany, and then there’s Water Avenue where the old Oregon Electric line runs down the middle of the street.

According to the city staff, none of the crossings are equipped to quiet-zone standards, and making the required changes on Water Avenue “is technically infeasible.” But if somebody wanted to try it anyway, the staff report going to the city council Monday says the cost of making the improvements at the 29 Albany crossings “has been estimated at up to $14.5 million in today’s dollars.” So it’s not going to be done. Which is just as well. What would a railroad town be without the haunting wails of trains rolling through in the middle of the night? (hh)


7 responses to “Quiet zones in Albany: Better not”