Quick repairs in the middle of the night 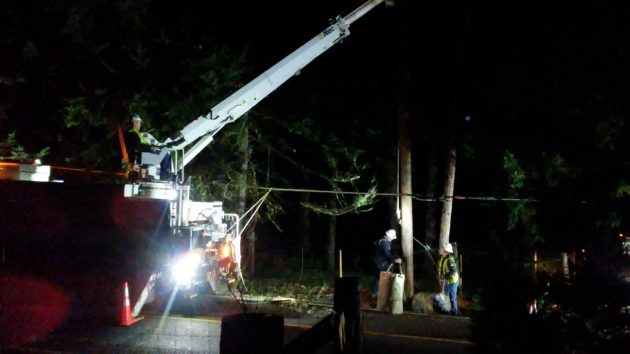 It’s not every night you wake up with the flashes of emergency lights playing on the ceiling of your room. So when it happens, you are inclined to get up, get dressed and see what’s going on outside in front of your house.

What was going on in this case was that a power company crew was replacing a pole. Between 4 and 5 on Sunday morning. Pitch black outside, except where powerful work lights from their rigs illuminated the scene.

Around midnight Saturday somebody had veered off the road and slammed into a pole, and Benton County deputy sheriffs responded with at least a couple of units. Evidently the damage to the pole was bad enough that fixing it couldn’t wait. So the call was made to Pacific Power.

I can only imagine how this goes. The crew members get a call at home to get them out of bed. They drive to meet at the yard where their equipment awaits, and where they have a supply of poles.  Then they make their way to rural North Albany and get to work with the help of a crane and a bucket truck. They get the wires off the old pole. They use their truck-mounted auger to drill a hole in the ground for the new one and set it up. They get the wires reattached. They lower the broken pole to the ground and haul it away as they leave.

The neighborhood onlooker clicks a quick photo and heads inside to go back to sleep. Two or three hours later, after dawn on a gray December morning, it’s hard to tell that anything happened at all.

But you know what you saw, and you can’t help but be impressed by how this utility crew did its complicated work, on a winter night, with quiet efficiency and speed. (hh)


2 responses to “Quick repairs in the middle of the night”