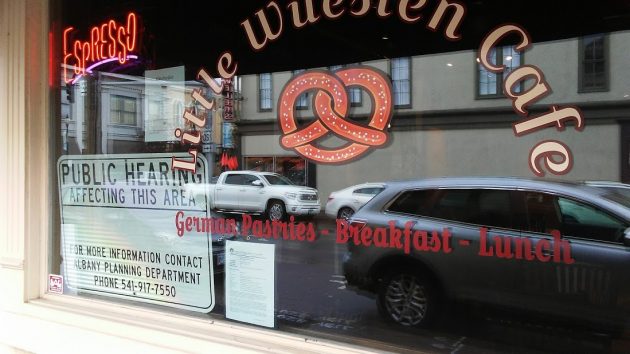 The big sign in the window advertises a public hearing regarding the Little Wuesten Café on Ellsworth Street.

Here’s an update on the story below: After a public hearing of about 10 minutes, during which only the applicant spoke, the Albany Landmarks Advisory Commission tonight (Oct. 4) unanimously approved an “alteration” on the outside of the Bikman Building so that the Little Wuesten Café can install an exhaust fan in a second-floor window facing the alley on the building’s south side.

Having breakfast in one of the newer restaurants downtown, I could not help but notice a sign announcing that a pubic hearing would be held. The hearing concerns the fan of a hood over the stove, and I figured there must be a story there somewhere.

Yes, there is. The restaurant is the Little Wuesten Café at 115 Ellsworth St. S.W., in the Bikman Building. It’s named after Wüsten, the hometown in northwestern Germany of the owner’s husband. The owner, Liz Bobe, told my wife and me some weeks ago that the fire department had inspected her restaurant and told her she would have to install a new hood in the kitchen.

The hood requires an exhaust fan to the outside. The Bikman Building, designed by Charles Burggraf and built around 1925, is considered historic, and any outside alteration such as this fan requires approval of the city government, namely the Landmarks Advisory Commission.

Landmarks will hold a hearing on Mrs. Bobe’s application to be allowed to install a fan in what is now a window facing the alley on the south side of the building. The hearing will be at 6 p.m. this Wednesday (Oct. 4) at City Hall. The city’s community development department, noting that the hood and fan are necessary as a matter of fire and life safety and won’t materially affect the building’s appearance, has recommended that the application be approved.

The application includes a price quote for a “Type I hood” with a “belt drive centrifugal sidewall exchaust fan.” The quoted price was $11,250.

The breakfast I was eating — scrambled eggs with a mountain of fried potatoes and a bowl of spinach — was outstanding. It cost $6. At that rate, a bunch of us are going to have to buy and consume one thousand eight hundred and seventy-five breakfasts to cover the price of the new kitchen gear alone, never mind wages, rent or a modest profit.

So what’s the story here, the main point? It is this: We are reminded how tough it is to start a small business and keep it going. It takes not just a sizable expense as in this case but also a vast amount of work. The people at that café are on the job almost every day, putting out great food. And in downtown Albany, there also is red tape including a public hearing about installing a fan. (hh) 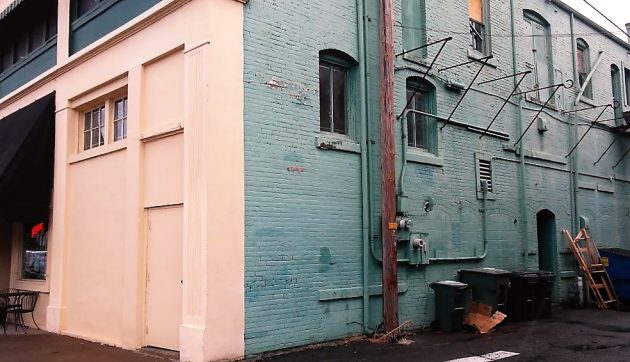 The fan will go in the window to the left of the power pole.