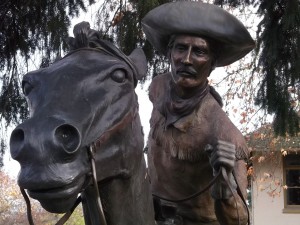 What we in the mid-valley could use, among many other things, is more public art.

What I’m talking about is public display of the kind of works that draw attention, add visual interest and flavor to otherwise bland public places, and give people something to talk about and children something to stir their imagination. As far as I’m concerned, it doesn’t have to be realistic, but it probably helps if it at least imitates the real world or is shaped like things people might recognize.

A good example was the display of neon tubes outlining the shape of horses in the median of Interstate 5 south of Albany during one year in the early nineties. I still remember driving down to Eugene and back that winter and looking forward to seeing to those ghostly and colorful steeds rising out of the nighttime mist. Lots of people liked those neon horses.

More recently, because of the efforts of John Boock, a retired Albany attorney, a vacant lot at Lyon and First has become kind of an artist’s garden, and the downtown library gained a symbolic kind of sculpture on the corner of Ferry and Third. In Corvallis, some downtown street corners were adorned some years ago with renditions of salmon leaping in water, but on rainy nights at first glance those things make motorists think there’s somebody on the curb waiting to cross the street.

In the Southern Oregon town of Jacksonville, a life-size Pony Express rider in bronze gallops along in front of the historic former courthouse. He makes people think of American history — or legends. A three-year-old of our acquaintance looked at him the other day as we were walking by, wrinkled her brow and asked, “Grandma, does he come alive at night?” (hh)

From: Keo Teghtmeyer: Noticed a business card re your web-site today at Laymans, so decided to take a look; glad I looked. I completely agree with you re the need for art in cities (and in our lives).  Joseph is also a little Oregon town with several bronzes in addition to art galaries, etc. that bring the tourists in.  My husband and I have taken pictures all over of bronzes, murals, etc and often find other interesting things in those towns to do when we stop. Hopefully, the same will be said of Albany some day.
My daughter moved to Albany 10 years ago and we were not impressed with the downtown.  We moved here 10 months ago and love what has been done; it is too bad there is that vocal element against it.  In our travels we have noticed that towns that take care of the old areas seem to thrive, those that don’t, don’t.
Miss your editorials in the Democrat-Herald..I will be a reader of your site!