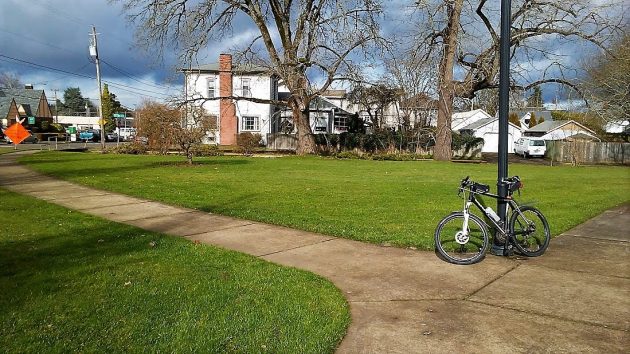 Behind and to the left of my bike, that’s the spot the Albany Arts Commission has picked for a piece of public art, a sculpture most likely.

Albany is about to follow through on spending some money for public art. The plan is to invite artists to propose something — most likely a sculpture that would be placed on a patch of grass near the Lyon Street off-ramp from Highway 99.

The city council got a briefing on the project Monday from Parks Director Ed Hodney and Julie Jackson, chair of the volunteer Albany Arts Commission.

A city ordinance requires that 1 percent of the money spent on new public buildings must be spent on art, but the art doesn’t have to be in or near the buildings themselves. Based on the final construction costs of the new police station and the fire department’s Station 11, the amount remaining available is about $80,000, Hodney told the council. That’s after other expenses loosely related to “art” — historical displays including an antique pumper at the fire hall, and a bio-swale to handle rain water at police headquarters.

The arts commission considered various locations for this project and settled on a spot of grass near intersecting footpaths at Lyon Street and the off-ramp from Pacific Boulevard (Highway 99). The site is owned by the state, and the city will seek a permit from ODOT. Council consent is required, and the council gave it at Monday’s work session.

The panel intends to advertise a request for proposals for designs and will have a public forum before selecting a winning entry, which it then intends to submit for the city council’s OK . The winner doesn’t have to be a sculpture, but that’s the most likely possibility, Jackson acknowledged. The winning artist also doesn’t have to be from Albany.

The council was shown apparently famous examples of sculptures in public places. One was a duck and her ducklings in Boston. Another was a scene from Alice in Wonderland in New York’s Central Park.

The site off Lyon was carefully selected from a range of other locations around town, according to Jackson. It’s a gateway to downtown and visible from Albany Station (if you peer under the Pacific overpass from just the right spot).

The arts commission says the $80,000 from the public safety buildings will be “seed money.” There was talk of a crowdfunding campaign for the difference between that amount and whatever the project costs.

In the presentation to the council, the commission said it would like to complete this project in 2018. Once the designs are in hand, you can expect a spirited local discussion about particular proposals and the nature of art. But there’s no doubt that art in public places improves the ambiance of any town. (hh) 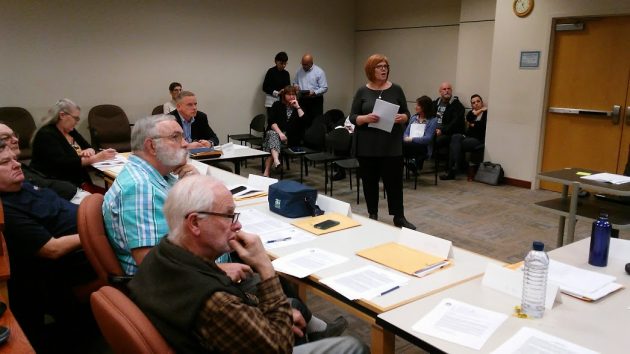 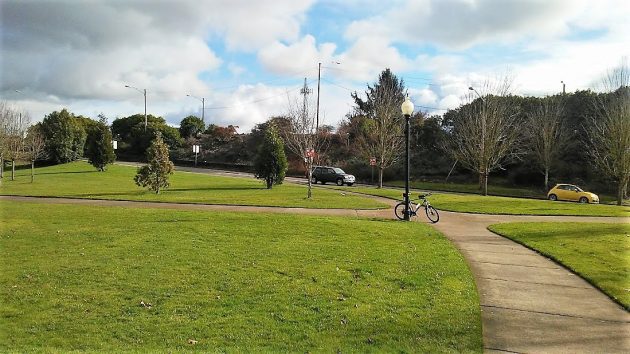 People will be able to see the art project as they drive down from the Pacific Boulevard viaduct.