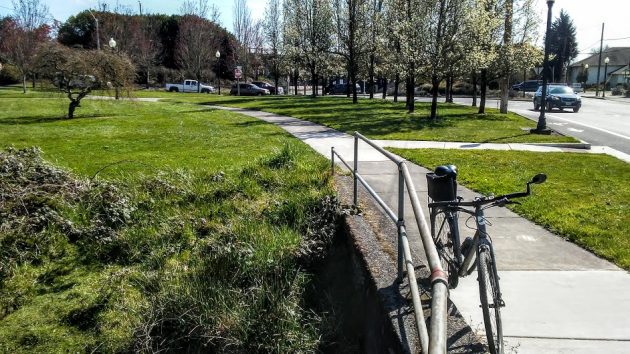 Looking south toward the Pacific Boulevard off-ramp to Lyon Street on Wednesday afternoon.

Somewhere on or near this corner, the city of Albany wants to place a big metal sculpture of wildflowers. So, to think about something other than the corona contagion for a minute, how is that coming along?

An ordinance passed in 1998 obligated he city council to spend 1 percent of the cost of the police and fire construction projects in 2017 on public art. As one part of that, the city entered into an $80,000 contract with South Carolina artist DeeDee Morrison to design and build a sculpture.

Last September, the city council asked the Oregon Department of Transportation to allow the sculpture to be placed on the the state’s right of way near the Lyon Street off-ramp of Pacific Boulevard. This was an iffy proposition considering that ODOT had earlier turned down a downtown wayfinding sign in the same grassy area as too distracting.

“We actually got approval from ODOT earlier this month,” Parks and Recreation Director Kim Lyddane reported this morning.

In September she had said the city would not ask the artist to start making the sculpture until ODOT approved the location, and she hoped the work might be ready for installation as early as April 2020. But the situation has changed.

“We are working with the artist now to determine if any modifications need to take place to the original design as many material costs have increased since the original bid,” Lyddane wrote in an email. “As a team, we are starting to develop what a new timeline could look like for installation. I hope to know more in the coming weeks.”

The original design was for an array of Oregon wildflowers up to 12 feet tall, with the outlines of pollinating bugs laser-cut into the metal petals. LED lights in changing colors were to be part of the design. Now we’ll have to wait and see what the final design will be, assuming the project still goes ahead. (hh)