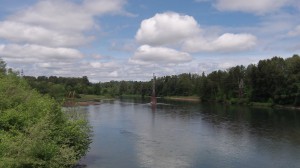 The property tax reaches across even the wide Willamette, boundary between Linn and Benton counties.

Oregon’s property tax system is so complicated that most citizens have no idea how it works. Many public officials don’t either.

The complications are such that sometimes, voters approve taxes for police and fire protection and some of the money is legally siphoned off and given or loaned to private developers. Hard to believe, but it happens in Albany and elsewhere. The legislature now is trying to stop that particular oddity, but it won’t change Albany’s situation for some years.

Another oddity: In Corvallis, Hewlett-Packard has won an appeal of its property tax assessment and is due a refund of several million dollars. As a result, many taxing districts including the city of Albany and Albany schools will have to give up some money as their share of the refund. But being in Corvallis, HP pays no taxes to Albany, does it? Well, apparently it does.

As explained by Stewart Taylor, the Albany finance director, when property taxes are paid, they are “segregated” or distributed in the proportion of each taxing district’s share of the total tax take in the county. Evidently, if HP pays a dollar in taxes, a few pennies go to Albany because part of the city lies in Benton County. Refunds work in reverse, so Albany has to cough up its share. This makes no sense at all — which is par for the course for the crazy tax setup we have. (hh)

Ted Salmons responded on May 30: The scary thing is that if you asked the same question to five people involved in managing the property tax distribution I’d cover the bets that you would most likely get five different answers.

Mike Reynolds responded on May 30: It is also my understanding that all the schools in Oregon are affected. Whatever portion of the HP refund that is school related is distributed (deducted) to all the schools via the state school fund formula, if I understand correctly.

My reaction: I don’t know about the effect on all Oregon schools, but it’s possible since the state equalizes school funding based partly on local tax collections. If anyone has the details, please let me know. (hh)