Private liquor sales? Not yet 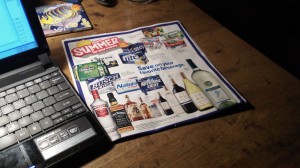 The ad must have been meant for some other state.

Hard liquor on sale at Walmart? That’s what the ad insert in the paper on Sunday said. But it isn’t so, I’m pretty sure, at Walmart stores in Oregon.

For decades, Oregon has guarded its monopoly on selling spirits through state-licensed agents and stores. Some time ago, the Oregon Liquor Control Commission started a pilot program allowing four liquor stores to sell beer and wine and four groceries to sell hard liquor. The beer and wine stores are operating, Christie Scott of the OLCC told me, but no grocery store or chain has yet applied to sell hard liquor. And no whiskey or vodka or rum — as the ad claimed — is for sale at any Oregon supermarket.

One segment of the grocery business had been working for repeal of the Oregon liquor monopoly, especially after voters in Washington state passed an initiative to abolish the state monopoly there. But they said they wanted to test the waters in the 2013 legislature before making plans for an initiative in 2014.

Well, the legislature is almost over and nothing has been done on the liquor front. Sen. Brian Boquist of Dallas introduced a bill calling for a plan to close the OLCC, but it went nowhere. Maybe that’s just as well. After Washington closed its state liquor stores, the price of booze shot way up. So for now, the prospects for privatizing Oregon liquor sales look poor, no matter what it says in Walmart ads. (hh)