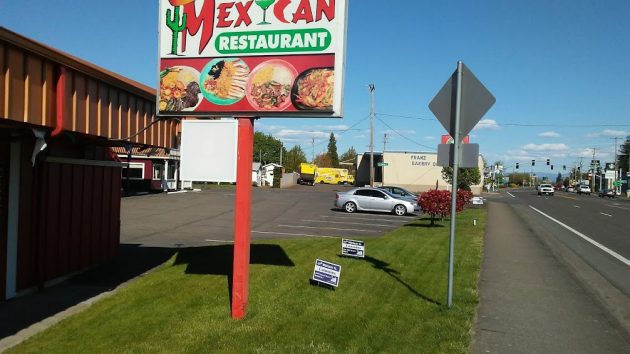 Miriam Cummins’ blue and white campaigm signs were back in place Monday outside this restaurant on Santiam Highway S.E.

Acting on the complaint of a rival candidate, Albany police last Thursday caused the removal of campaign signs for school board candidate Miriam Cummins outside four businesses. But it was a mistake, and when I checked on Monday afternoon the signs were back.

Cummins, 31, is one of three candidates for an at-large position on the board of Greater Albany Public Schools. On Facebook Sunday, she complained about the sign incident. On Monday I got a summary of what happened from Lt. Travis Giboney, in charge of investigations and a spokesman for the police department.

On April 25 the police got a complaint from Eric Aguinaga about sign violations at a couple of locations. Aguinaga, 35, also is running for the at-large spot on the school board.

Giboney said a community service officer was sent out and “found the signs to be in violation of the temporary sign ordinance, not realizing the exclusion for signs during an election period had changed.” (Albany revised its sign code last year.) Giboney added that “the issue was likely exacerbated” by outdated information on the city’s website.

Cummins went to talk with Giboney Monday and came away with the police report, which she distributed via Facebook. The report said Aguinaga had reported “multiple temporary candidate signs” at two locations. “The locations were advised of the complaint and the signs were removed.”

The locations were Cork’s doughnut shop and the Los Tequilas restaurant, next to each other on Santiam Highway S.E., and Los Compadres meat market and taqueria, which share a building on Pacific Boulevard next to Santiam Liquor.

Albany’s sign code is complicated and detailed. It generally limits businesses to one “temporary” sign of less than 3 square feet without having to get a permit. But for elections, it allows one “temporary sign per issue and per candidate…” Cummins is running for the Education Service District board as well as for GAPS, so the code allows her to have two signs, one for each race, in front of a business, which she did — and does again.

After talking with Giboney on Monday, Cummins told me: “He apologized and indicated that the officer should not have gone in to talk to the business since I was in compliance with the sign ordinance.”

Cummins, married and the mother of two, has a bachelor’s degree in Spanish and French from OSU and worked for five years as a translator and interpreter for the Linn-Benton-Lincoln Education Service District. Now she works for the Salem-Keizer Coalition for Equality. She expressed disappointment over the sign episode, saying it tends to reinforce distrust among the Latino community, one of the things she is running for school board to try to repair. (hh) 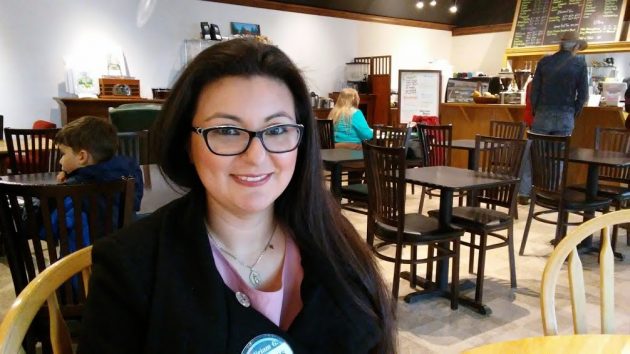 Miriam Cummins, as she talked about school issues over coffee at the Little Wuesten Cafe on April 10.