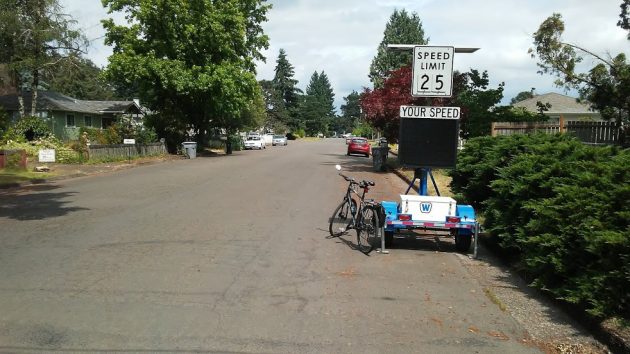 Willamette Avenue near Chicago Street Monday afternoon. Future traffic on this and other streets near The Banks apartments was one concern at Monday’s hearing.

The site plan for The Banks, a 105-unit housing complex on the Willamette River near Bowman Park, cleared the Albany Planning Commission on Monday night.

Long-time commission member Dala Rouse, who lives on Burkhart Street near the planned development, took the unusual step of coming down from behind the dais so she could testify against the project during the public hearing, and she did.

But the other members present — Mike Coos, Joann Miller, Daniel Sullivan, Diane Hunsaker, and Ann Ketter — voted to approve the application. Larry Tomlin presided over the meeting, but as chairman he didn’t vote. (Or if he did, I didn’t hear him.)

Residents and property owners in the neighborhood objected to the plans for the 6-acre site bounded by Geary and Alco Streets, Linn Avenue and the river. Mainly among their concerns was the effect on traffic. They also said the project site might flood, and there might be some remaining pollution from when part of the site housed Hub City Concrete 50 years ago and later the Permawood roofing-tile plant.

Representatives of the applicants countered that their studies showed traffic would be no problem, all the needed parking would be inside the development, the project met all regulations in regard to floods, and the site was extensively cleaned up and then cleared for “no further action” by the Department of Environmental Quality.

Robyn Morley, president of Salem-based River View Holdings LLC, the developers, said they had reduced the size of the proposal after a neighborhood meeting last year. As now planned, there will be 96 apartments with one or two bedrooms each in five three-story buildings, plus nine three-bedroom townhouses.

One of the opponents noted that the neighborhood now has 70 dwellings, so the addition of The Banks will increase the number of households two and a half times, to 175.

The site’s zoning, last changed in 2003, allows for apartments. The planning staff had found that the project met all the applicable conditions of the Albany development code. So there was little the planning commission could do other than approve. Sullivan, one of the members, said that if people feel let down, it’s not by the commission but by state and local laws.  (hh) 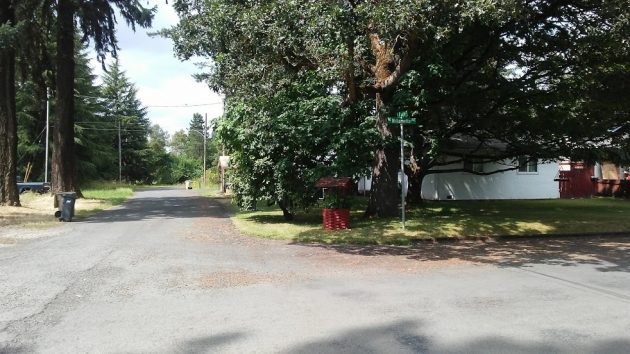 This is the north end of Chicago Street. The apartment project will lie at its end.