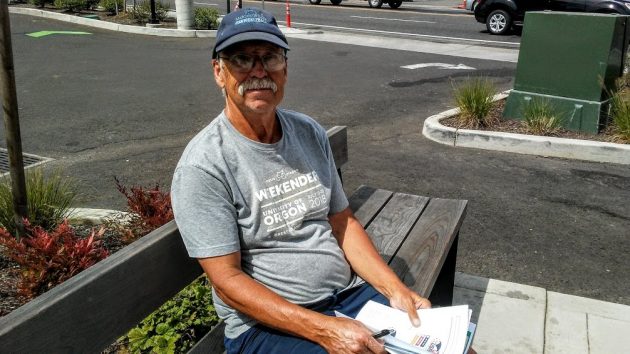 John Morey is the president of the Albany Pickleball Club.

The name of this sport — pickleball — may sound silly, but its players take it seriously. If you want to see how seriously, watch them compete in a regional tournament in Albany on Sept. 6, 7 and 8.

This event next weekend is the 2019 Pacific Northwest Regional Pickleball Tournament for “super seniors,” meaning players aged 60 and above. About 250 of these pickleballers are expected to compete at the Albany Tennis Center, 1423 27th Ave. S.W. (Another section of the regional, presumably for younger competitors, will be in Portland.)

John Morey told me about this. Retired from Wah Chang, he’s president of the Albany Pickleball Club. And at 69, he’s a super senior himself.

The game, if you haven’t seen it, is kind of like a combination of badminton, tennis and ping pong. The players use paddles instead of rackets to knock a plastic wiffle ball back and forth across a net. It looks easy, but when the other half and I tried it a few weeks ago at Hackleman Park, we found out otherwise. It’s more challenging than it looks, especially if you’ve played your share of both tennis and table tennis in years gone by.

Pickleball is said to have gotten its name because one of the Seattle-area families that invented it in 1965 had a dog named Pickles. In recent years the game has been catching on not just in the United States but around the world. The USA Pickleball Association estimates there were more than 3 million players in this country alone in 2018, a 12 percent jump from the year before.

Responding to the trend, the city of Albany and Linn-Benton Community College are cooperating on a project to convert the college’s tennis courts for pickleball. The city council approved the deal on May 20, and the city expects to spend up to $300,000 in park systems deveopment charges to pay for constructing the courts.

Morey told me that next year’s pickleball regional will take place at the new LBCC courts.

This Albany tournament, for players from Oregon, Washington, Idaho, and Alaska, is a qualifying event for nationals. So I would guess the competition will be intense.

And maybe one day the governing body of this sport will change its name so that it no longer conjures up mental images of sour little gerkins in a jar. (hh)


15 responses to “Pickleball in Albany: Hot matches coming up”