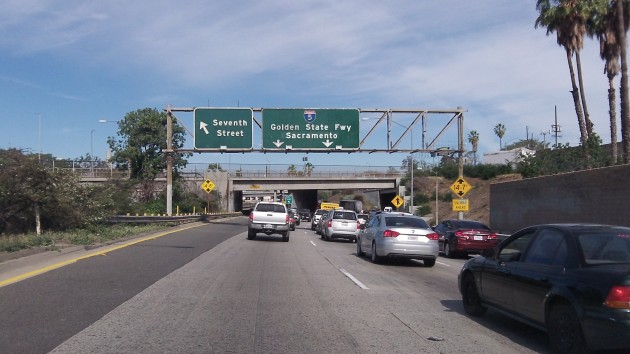 On I-5 in LA, not far from Vernon, where city workers far outnumber permanent residents.

California residents were no doubt interested to learn last week that Kern County paid a contract physician more than $1.3 million in 2014, and that in the city of Burbank a police sergeant earned $592,625, making the doctor and the cop the highest paid county and city workers, respectively, in the state. The state controller, Betty T. Yee, has just issued her annual report of city and county payroll information, something that Oregon doesn’t have but I wish we did.

Yee’s predecessor, John Chiang, started compiling these reports in 2010 after a financial corruption scandal erupted in the city of Bell. Chiang ordered municipal governments to supply payroll information, using the authority of two sections of the California Government Code.

The 2014 report came out last week. Among other things it highlighted the peculiar city of Vernon, which has just 123 residents but more than 200 city employees pulling down an average of $103,601 a year in salary each plus more than $32,000 in health and retirement benefits.

(What explains it is that tiny Vernon — 5.2 square miles of industrial property just west of the 5 and south of the 10 in Los Angeles County — houses about 1,800 businesses with more than 50,000 employees. Its fire and police departments are big enough to protect all those industries and people. The fire department has four fully staffed stations, and a photo of the city police force shows 36 uniformed officers plus six support staff. The city runs its own electric, gas and fiber-optic utilities and has a general fund budget of $56 million.)

Oregon prides itself on transparency, but this pride is undeserved. On the state level, online payroll information is hard to access and does not include benefit data. For local governments, it may be possible to extract or calculate payroll data from individual city and county budgets, but it’s not easy.

This information would be of interest to many taxpayers and voters. Citizens can ask for it but, likely as not, at least at the state level their public-records requests would be met by demands for stiff fees to compile the requisite lists.

Oregon, sad to say, has no state officials like the California state controller, and no one in the state administration actively interested in keeping the public better and more completely informed about this kind of news. (hh)