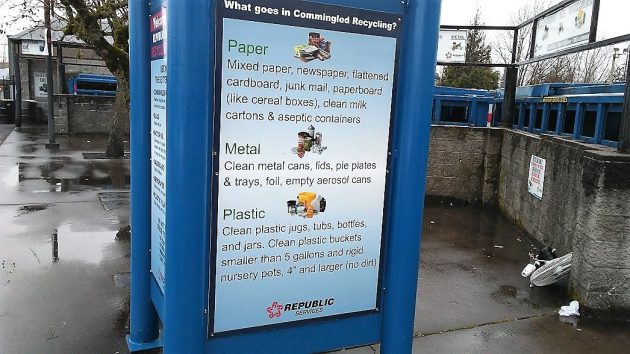 This sign at the Republic Services recycling depot on Industrial Way will have to be updated. Its advice is no longer good.

Trash pickup by Republic Services in Albany and much of the mid-valley will cost $2 more per month because of the trouble with recycling. And we’ll be able to recycle fewer kinds of things.

The Albany City Council voted 4-0 Monday to approve Republic’s request for the rate hike. (Councilors Rich Kellum and Ray Kopczynski were absent.) Since the company bills every two months, each bill will be $4 higher.

As reported earlier, a lot of stuff people throw in their mixed-recycling or commingled carts is no longer recyclable because buyers no longer want it. And some of it was never recyclable in the first place, but processors or buyers — like China — put up with the trash because they wanted the rest. They no longer do.

Republic’s Julie Jackson, municipal manager, and regional General Manager Shawn Edmonds appeared before the Albany council for the second time Monday. The company wants the additional income to make up for the collapse of the old recycling regime. Instead of selling stuff to a processor it now has to pay the processor to take it.

The company has issued a very limited list of things that can still be put in the recycling carts: Steel and aluminum cans; cardboard and paper including newspapers and magazines and even phone books and paperback books; and plastic bottles and jugs.

Everything else is a no-no. And the stuff that is allowed in the carts must be clean and dry. (Nobody seems to be concerned about all the extra water that households will have to expend, or the grease and fat likely to clog waste lines once it’s washed down the drain.)

Republic has asked for the same rate hike in other jurisdictions in Linn and Benton counties. Lebanon’s council will take it up in May. Harrisburg has approved it. Others are scheduled to consider it or may have already approved it.

With the rate hike Republic plans to keep commingled recycling going but try to get people to throw less trash into the recycling carts. One alternative would have been to put everything in the trash and take it to the Coffin Butte dump. But the council didn’t like that. One worry: What happens when Coffin Butte gets full and no other landfill can be licensed?

Republic’s Edmonds told me that Coffin Butte is estimated to be able to accept refuse for another 35 years. The dump has been growing taller every year. Julie Jackson said the state says the landfill can’t get taller than the top of Coffin Butte, the hill for which it is named. But it could presumably expand sideways.

According to the talk at Monday’s council session, the $2 monthly price jump may not be the last. Clearly all of us have a stake in generating as little “solid waste” as we can manage. (hh)