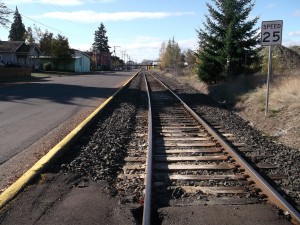 The former Oregon Electric line runs along Albany’s Water Avenue. Albany doesn’t want “high-speed” trains on this part of the route, the Water Avenue segment of which has been the subject of a lawsuit by the city for the last few years. The suit is said to be near a settlement, but nothing has been signed.

In regard to passenger rail in the Willamette Valley, the meetings continue. Whether they will accomplish anything, though, is open to grave doubt.

As previous studies have estimated, improving either the main line of the Union Pacific or the old Oregon Electric to carry more and faster passenger trains is going to cost around $2 billion. With the federal government neck-deep in debt and the state always short of cash, this is not going to be available any time soon. But as I’ve mentioned once or twice, ODOT-Rail is in the middle of an environmental impact study on improved or even high-speed rail, a study it says is costing about $10 million in state and federal funds.

Among other things the study committee, which includes Albany Mayor Sharon Konopa, has to settle on a preferred route. That’s either the main line of the UP from Portland to Eugene, via Salem and Albany, or the old Oregon Electric, also going through Albany now. One private group from the Portland area is pushing for putting passenger rail down the middle of I-5, which would involve building not just a track and stations but rebuilding part the interstate and many of its bridges as well.

All the while, the most obvious solution is staring everybody in the face. It is to forget about the idea of super-fast trains and instead double-track the main line from Eugene to Portland and settle for trains that are consistently on time. A former ODOT-Rail official, now retired, told me that double-tracking would quadruple the capacity of the line for both freight and passenger traffic. It would also cost a lot, sure, but it would avoid the complications of picking a new route and building a completely new set of stations. And whatever its environmental impact would be, it likely would be less than that of any other alternative.

ODOT has called for another round of open houses for the public to have its say. The one in Albany will be from 5 to 7 p.m. on Wednesday, Jan 16, 2013, in the Albany Public Library on 14th Avenue S.E. If you get a chance to go, tell them double tracking the main line is the solution you prefer. (hh)