Park’s open, so let’s ride through it

This should be the last mention of Bryant Park on this site for a while, don’t you think? But since the park’s locked gates were an item on Sunday and Tuesday, it’s only fair to report that the gates are open again now.

Having driven in, a few people were in the 100-year-old Albany park on Tuesday afternoon. Though I didn’t need the gates to be open for this, I took a quick turn around the place on the bike.

One thing worth noting is that the parks department has prepared the parking lots for the new year. They looked covered with new gravel.

The park had been closed to motor traffic on Feb. 25 in anticipation of high water in the Willamette and Calapooia rivers. Unlike in past winters, no major flooding materialized. And now, the chance of the park being inundated has greatly diminished, though a sudden thaw in the Cascades along with a big rainstorm could change that.

It’s unlikely to happen, but there should be plenty of notice if it does. (hh) 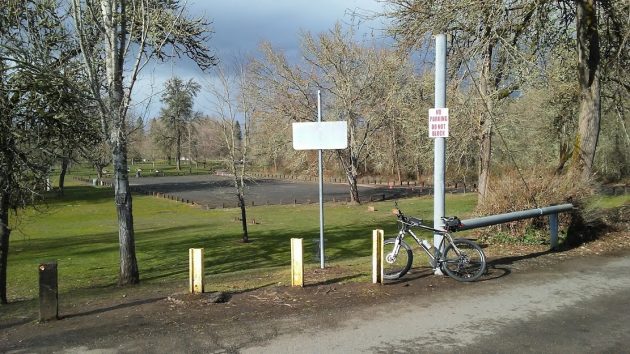 
4 responses to “Park’s open, so let’s ride through it”