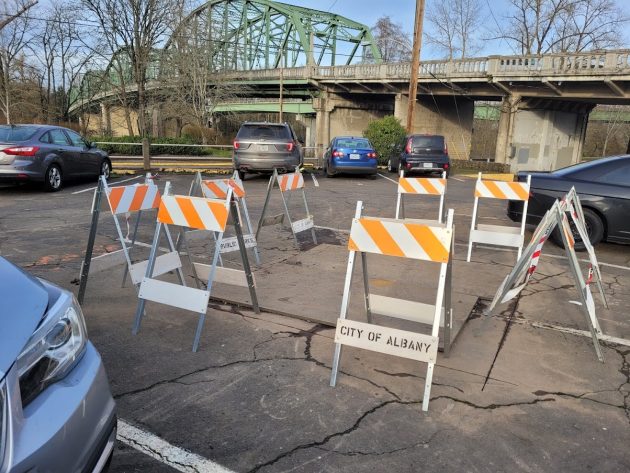 The mysterious hole that opened up in this parking lot off Water Avenue has been filled, and its origin explained.

Drivers parking their cars in the city of Albany-owned lot behind 201 First Avenue W. noticed a hole in the pavement. Then the hole got bigger. What could it be?

Last Friday, Teri Plagmann, whose law office is in the building, sent me a photo. By the time I was able to take a look myself, on Wednesday, the hole had been filled but the city’s barricades were still there.

So what was this mysterious thing that looked like some kind of sink hole, and what had caused it?

It’s in a city lot with leased spaces, so for the answer I turned to Albany Public Works Director Chris Bailey and Staci Belcastro, the city engineer. And they promptly supplied it.

“We excavated the hole and found the remnants of what we think was an old underground cistern,” Bailey emailed me.

Checking old Sanborn fire maps, the city staff found notations for cisterns at intersections of many downtown streets. Bailey surmises they were there to store water for firefighting but says “there may be folks who know more about that than we do.”

This cistern had been covered by a thin steel plate and paved over, no one knows when. Eventually the site became a parking lot, and the cistern — Belcastro says it was 6 feet deep — was forgotten.

Until, that is, the plate rusted through and the covering layer of rock and asphalt collapsed.

The city has now filled the hole with concrete and repaired the surface.

The hole, Bailey added, had not been connected to the city’s storm water system or the Willamette River.

I didn’t hear of anyone or anything falling into this hole when it opened up. But who knows, maybe there are others like it around the old part of town. Watch where you go. (hh) 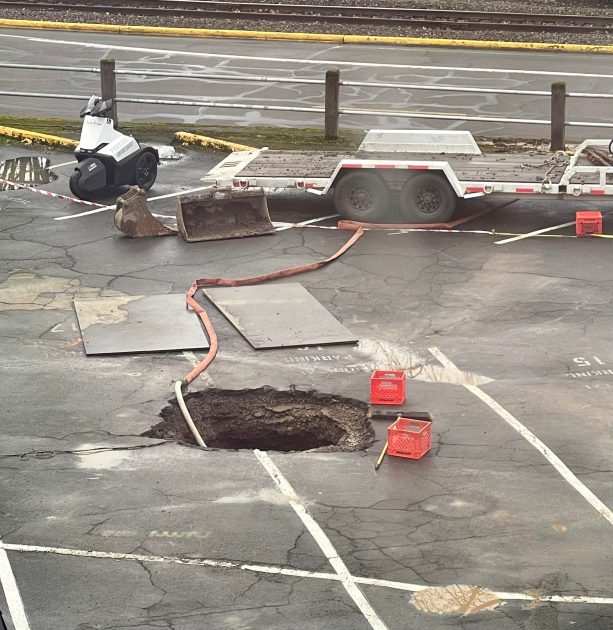 Teri Plagmann, whose law office is nearby, supplied this photo last week.


5 responses to “Parking lot hole, a mystery no more”