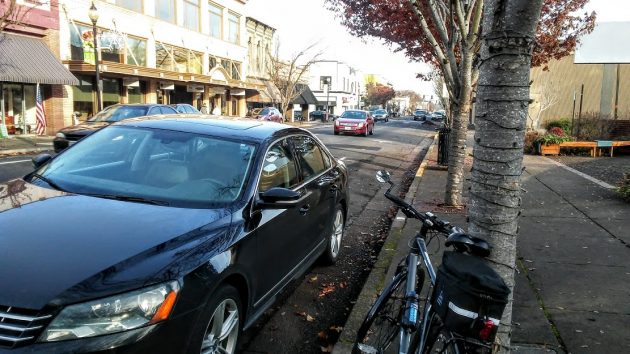 On First Avenue this afternoon, the bike points the way cars would head in the near lane if two-way traffic was restored.

How about restoring the original two-way traffic pattern to First and Second avenues in Albany’s downtown commercial core?

The idea has been kicked around before but never pursued. Now the Albany Traffic Safety Commission will consider it. The advisory group may discuss it as early as its next meeting, on Jan. 4, 2021.

Steph Nappa, one of the panel’s seven members, brought it up Monday as an item for future consideration. Chairman Ron Green and other members agreed. Green called the possibility exciting.

As local residents and drivers know, First Avenue is one way west from Main to Calapooia Street. And Second runs one way east for the same 15 blocks. Nappa suggested going back to a two-way  pattern only in the old commercial core west of Ellsworth.

Nappa is a transportation planner with the Cascades West Council of Governments. Councilman Dick Olsen appointed her to the city traffic panel in April 2020. Commissioners are appointed for three-year terms.

Albany’s 2001 downtown urban renewal plan listed conversion to two-way traffic on First and Second as one of its projects — No. 34, actually — but neither the council nor the urban renewal advisory board followed up.

At the moment I can’t find out when First and Second were turned into one-way streets. It was probably done when the Lyon Street Bridge was built in the early 1970s.

One-way traffic patterns became a fad in small towns across America about 50 years ago. But in recent years, many cities have changed back when they figured out that two-way traffic produces lower speeds and is better for commerce as well.

As it happens, one well publicized change-back was accomplished in 2017 by New Albany, Ind., a city of 36,000 on the Ohio River across from Louisville, Ky.

At Monday’s meeting, transportation systems analyst Ron Irish cautioned the commission that in Albany, converting First and Second to two-way traffic would be trickier than in other places. It would have a big impact on Highway 20 (Ellsworth and Lyon), and ODOT would have to be involved.

With ODOT in the picture you’d think this idea is dead from the start. But maybe not. Maybe the state agency could be convinced that the benefits to downtown Albany are big enough to warrant going ahead. (hh)