Paddling the Willamette: End of Day 2 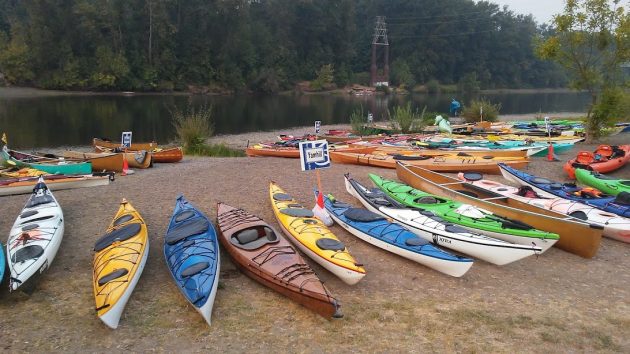 The beach at Bryant Park on Tuesday evening.

If you happened to see all those paddle craft lined up on the Willamette river bank at Bryant Park and were wondering what was going on, listen to Kate Ross Kuthe explain:

Kate is the outreach and education coordinator of Willamette Riverkeeper, the Portland-based nonprofit that tries to look after the Willamette and advocates on behalf of things like pollution prevention and restoration of the river’s natural surroundings.

On a bike ride through town, I happened across the the camp of the roughly 150 participants in this year’s Paddle Oregon event as they were having a catered dinner in Bryant Park at dusk on Tuesday. (Because of lots of high-altitude wildfire smoke in the air, dusk seemed to come a bit earlier than usual.)

This was the end of the paddlers’ second of five days on river. They had started in Harrisburg and spent the first night in Corvallis, from where they set out again Tuesday morning. After three more days of paddling, their river voyage will end in St. Paul.

No longer used for commercial navigation, the river has been largely cleaned up over the last 50 years. Now, among other things it’s a terrific recreation spot for people in small boats, especially canoes and kayaks.

I’m glad that so many  people are taking part in this year’s Oregon Paddle. May they inspire many others to strap on their life jackets and get out on this beautiful river before the summer is gone. (hh) 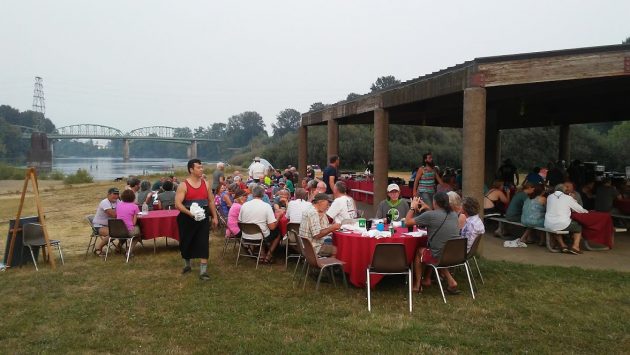 Dinner in Bryant Park, with Albany’s Willamette river bridges in the background.


6 responses to “Paddling the Willamette: End of Day 2”