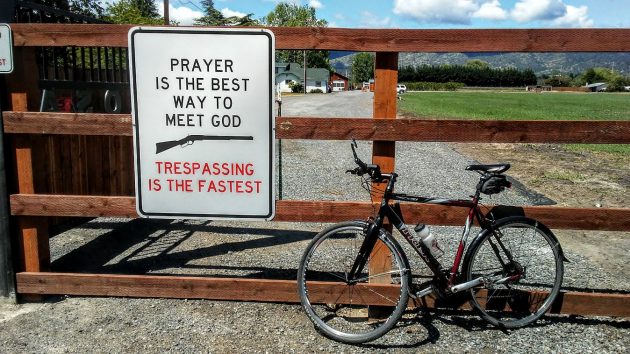 This sign got my attention on a bike ride Sunday.

Somehow, the sign I passed on a bike ride outside of Medford on Sunday reminded me of the gun bill — and signs of a completely different kind — the Oregon legislature has passed and sent to Governor Brown for her signature.

The legislation, enrolled as Senate Bill 554-B, was billed by its supporters as a safety measure. But it’s hard to escape the suspicion that its main point was to annoy gun owners generally, and especially those who are holders of state permits to carry handguns concealed.

Part of the bill requires firearms to be locked up or secured with a trigger lock when not under the control of their owners. Responsible owners already keep their guns secured. And others aren’t likely to become responsible because the state tells them what they must do in their own home.

The bill’s other part challenges the boards of public universities, community colleges and school districts to ban concealed-handgun-license holders from carrying on college or school grounds.

Under current law, it’s a felony to carry a gun in a public building, but the law makes an exception for people who have completed the requirements and obtained a concealed handgun license. SB 554 allows school and college boards — but not city councils or other local governing boards —  to adopt a policy cancelling that exception for their buildings and grounds.

If they do cancel it, they must “post a clearly visible sign at all normal points of entry to the school grounds.”

The bill takes effect 90 days after the legislature adjourns. After that, school boards everywhere will have to decide whether to adopt the policy allowed by the new law and post such signs.

“Clearly visible” signs “at all normal points of entry” — will these constant no-gun reminders serve as a deterrent? Or as an invitation to trouble? (hh)


9 responses to “Oregon gun bill: A question of signs”