From the files: A lane splitter on I-5 heading north into LA in October 2014.

Lane splitting is legal in California, as the late Jim Clausen informed me when I marveled at the nerve of the guy in this shot, which I took on the Santa Ana Freeway and then published in October 2014. Some motorcyclists and state lawmakers now want to make the practice legal in Oregon as well.

The other day I had a chat with Rich Burright, a dedicated motorcyclist. He’s a member of Hub City Abate, a mid-valley group promoting training, responsible motorcycle riding, and traffic safety in general. He told me about Senate Bill 385, introduced ahead of the legislative session that starts in Salem this week.

This is a bipartisan bill. Introduced at the request of Democrat Val Hoyle, a former legislator from Eugene, the bill counts among its cosponsors Sens. Sara Gelser, D-Corvallis, and Kim Thatcher, R-Keizer, as well as Rep. Sherrie Sprenger, R-Scio. 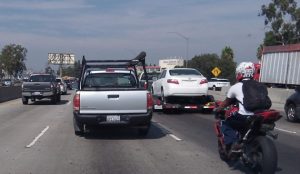 Shooting for the gap: He made it.

On multi-lane highways, the bill would allow the operators of motorcycles and mopeds to drive between adjacent lanes of vehicles (as long as they’re all going in the same direction).

Restrictions would apply. however. First, only two-wheelers would be allowed to split lanes. For obvious reasons, those three-wheel contraptions you see sometimes would not be covered. Nor would motorcycles with sidecars.

Also, lane splitting would be legal only on highways with posted speed limits of 50 mph or greater, and only if traffic has slowed to 10 mph or stopped altogether, and only if motorcycles go no faster than 20 miles an hour.

The American Motorcyclist Association, in a 2016 statement on lane splitting, said the practice is not illegal in only one state, California. Legislation to allow it was offered in other states but so far nothing had passed. The association points to a study done at the University California at Berkeley, which found that when lane splitting is allowed, motorcyclists are slightly less likely to be hurt or killed in traffic. This makes sense because if they’re between lanes in stop-and-go traffic, motorcycles are less likely to become involved in a rear-end crash. That alone is a reason to pass the bill.

Burright told me that legalizing lane splitting would have another benefit: Drivers of air-cooled machines would have to worry less about overheating when they don’t have to creep along with very slow traffic or come to frequent stops.

The practical effect of the Oregon law change would be limited to traffic jams on the freeway, where motorcyclists would be driving legally as they carefully and slowly thread their way between cars and trucks. That would be different from what I saw that day on the Santa Ana Freeway. I’m pretty sure those guys were not going 20 miles an hour or less. (hh)