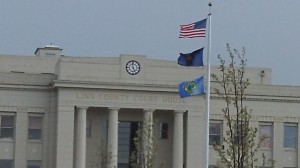 More openness in public meetings would be like a stiff breeze.

Oregon has a public meetings law, but whenever things might get interesting, the public can be kept out. The law says public bodies like the city council must meet in public when deliberating or making decisions. But there are exceptions.

For instance, the public may be kept out when governing boards hire or discipline public officers. The idea is to encourage frank discussion, and also to avoid embarrassment. But why can’t be frank in public? And if a governing board finds it necessary to discipline an official, you’d think that’s exactly what the public should be able to see.

Another occasion when closed meetings are allowed is to talk about real estate transactions, ostensibly to protect the public from being overcharged. But if a city felt it was being overcharged, it could use eminent domain or buy another site.

Most closed meetings are held to get legal advice, usually about actual or pending lawsuits. If this was done in public, the public would be more understanding of the result. And as for potential adversaries learning about legal strategy, opposing lawyers, if they’re any good, almost surely can figure this out on their own.

Regardless of the reason for a closed meeting, under the law final decisions always have to be made in public. But closed sessions, when consensus is usually reached, rob the public of influence early on and may keep people from understanding what is done in their name. The law ought to be revised and opened up. (hh)

Tom Cordier: I have concerns that the recent and upcoming closed meetings of Albany’s city council on the development of the council’s position on the measures may violate the law. If the legal advice given to the council includes a discussion of the political implications of the measures; that would be a violation of the law.
It is my hope that those journalists attending the meetings will make the determination to report the portions of the meetings that fall outside the legal framework.
Consensus on how to vote at the public meeting should not be done in a closed meeting. If at the later public meeting there is not a full discussion of the reasons for a yes/no vote, that would indicate the closed meeting was used inappropriately.
Frankly, it is my opinion that all discussion about the just passed measures should be done in public — even the legal advice. It was clear last summer that Delapoer’s legal advice on the language of the ballot titles was severely flawed to the extent that the judge struck down all of Delopoer’s language.

Rich Kellum:  As a city councilor,  I can see the reason for privacy at times. It is not whether or not I or one of the other Councilors would be embarassed,  rather whether or not somone speaking to us would not be willing to tell us EXACTLY what they were thinking.  So a limited amount of secrecy seems to be reasonable,  legal issues,  employee privacy, labor negociations etc.  That having been said,  I think that we go way too far to insure that there is not a voting majority anywhere at anytime.  I cannot invite more than two fellow councilors to a gathering of fellow Beaver fans for lunch because someone might be so paranoid as to think we would be doing “business” while talking about the baseball team.

Ray Kopczynski: “Most closed meetings [Executive Sessions] are held to get legal advice, usually about actual or pending lawsuits….But closed sessions, when consensus is usually reached, rob the public of influence early on and may keep people from understanding what is done in their name.”
I disagree.  Attorney-client confidentiality is of critical importance for anyone, be it individuals or municipal organizations. While I doubt attending a meeting will influence anyone simply by their presence, the public always has days, weeks, and months[!] prior to a public vote from which to “influence” a particular councilor to their viewpoint on any given issue. Yes, they do have to influence at least four  councilors (or two county commissioners) to be effective… In my limited time as a councilor, I have not seen a single instance of “consensus” reached at an executive session.