Open meetings: Let’s keep them so 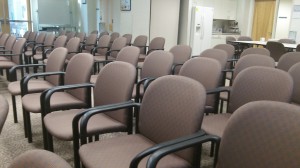 Albany city meetings, for instance, are open to the public even if no one shows up.

By and large, Oregon’s public meetings law works pretty well. So there’s no big reason to try to fix it. The House Rules Committee, though, is holding a public hearing on Wednesday (May 22) on House Bill 3513, which attempts to refine the definition of when public bodies, like a city council or county board of commissioners, must meet in public.

The bill would allow fact-gathering meetings to be closed to the public. Boards could also meet in private when considering anything other than budget or policy issues, whatever those are. The public could also be barred when boards meet somewhere other than their regular meeting place. That seems to open the door wide to excluding the public from all sorts of discussions.

The bill was prompted by a problem a few years ago in Lane County, where a decision apparently was made in private and ended up the subject of a court case. But there’s no reason to further confuse the question of open meetings with a bill that seems to make even more exceptions to the general requirement.

The general requirement is that governing boards must deliberate and make their decisions so that the public can attend. That’s simple enough, and that’s how it should stay. (hh)

Gordon L. Shadle responded on May 19:  I agree. We don’t need additional exceptions to the public meetings laws.
The 2011 Lane County case (Dumdi, Anderson v. Lane County Board of Commissioners) is very important in this regard – serial meetings out of the public eye now violate Oregon’s public meetings laws.
Historically, convening a quorum meant a public body meeting in the same public place to deliberate toward a public decision.  Now, a series of private one-on-one communications or face-to-face meetings with less than a quorum may constitute a deliberation toward a decision. Such conduct makes the governing body’s public vote a sham. It violates the principle that public issues should be deliberated, and decided, in public.

Albany Councilman Rich Kellum responded on May 22:  I do not advocate having many closed meetings. The ones that are needed from my perspective have to do with negotiations, labor, purchase, sale or legal issues.
What I find most bothersome is not being able to attend regular meetings,  (Chamber of Commerce) if there are more than three councilors present, There are entities out there who say if you go to a River Rhythms concert and there are enough people for a quorum even though they are spread out over a large area and do not speak about government business, that constitutes a public meeting. That needs fixed.

My response to Councilor Kellum: The law is clear that public bodies must meet in public when deliberating or deciding public issues. No sensible citizen claims the council cannot attend functions together if no deliberations take place or decisions are made. What public bodies must not do is to evade the law by meeting serially in groups smaller than a quorum in order to reach decisions out of the public eye. (hh)