So here I am on the Oregon coast, once again keeping an eye on the sea level in case it is rising because of climate change. and I barely escape having the sea soaking my socks. So yeah, it must be rising faster than I thought.

Relax, I’m kidding. A sudden wave surging on to the beach is one thing. But nobody can detect changes in the level of the ocean by looking at it every few weeks.

If the sea level is changing at all — and it’s been rising since the last ice age ended — the change is measured in millimeters per year. And it’s completely hidden by the daily fluctuations due to wind and weather and the tides, not to mention the geological changes in the elevation of nearby land. (Years ago I learned in a lecture at Oregon State that part of the Oregon coast is slowly rising while another part is sinking.)

Still, looking at the same spot of the coast over many years puts into perspective the alarmist warnings we get now and then, ominous predictions that coastal communities around the world face certain doom because they’ll be under water owing to climate change. At the rate the level of the ocean changes in the real world — the world you see when you look it — it’s clear that mankind has plenty of time to cope with whatever change is taking place.

If it takes a century or two for low-lying places to be swamped, they have time to do one of two things. They can protect themselves the way the Dutch have done for a long time, which obviously works, even on the stormy North Sea. Or they can move. (hh) 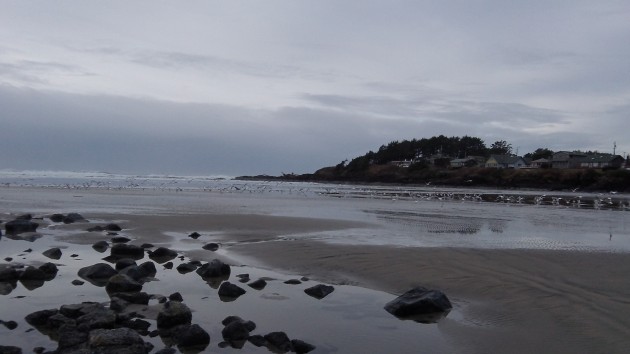 
One response to “Oops, caught by sea level rise”