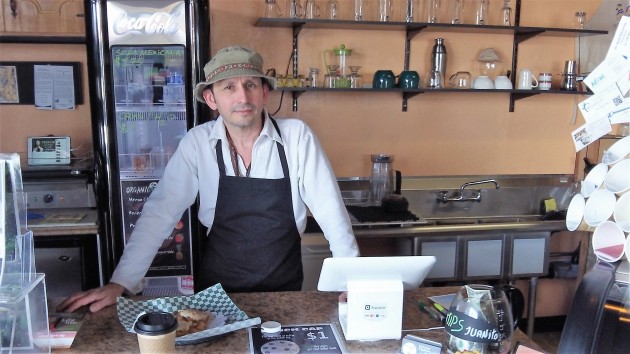 Alex Contreras behind the counter of his coffee shop.

On Monday I had a cup of coffee and a piece of apple pie at Universal Coffee while the owner, Alex Contreras, told me about his ideas for the old church across the parking lot. And ambitious ideas they are, ideas he hopes can help bridge what sometimes looks like an Albany cultural divide.

Contreras grew up in Costa Rica, worked in his father’s coffee business there, studied music and became a classical guitarist, immigrated to this country and, a year and four months ago, opened his coffee shop in the Carriage House Plaza.

Across the parking lot, at Santiam Road and Main Street, there’s the historic Cumberland Presbyterian Church, built in 1892, vacant for many years, and bought by the city of Albany for $150,000 in 2000 because it was in the way of street expansion plans. The street plans changed and the property was declared surplus. In February 2015, the city council agreed to sell it for a token $111 to Samaritan Ministries, which wanted to restore it and use it as a counseling and support center for people in need. But that plan fell apart and the city still owns the property. It has leased it on a month-to-month basis to Contreras and his wife.

They use the building for storage now. But Contreras has high hopes. He’d like to move his shop there and run it as a kind of cultural center that would combine coffee, music and visual art and serve as a gathering place where English- and Spanish-speaking Albany residents would mingle, more than they do in their daily routines.

More than that, he thinks the place could act as a catalyst to spark more people-oriented development on the east side of the old town, especially along nearby Water Avenue. (He was explaining all this to me while I was also concentrating on the excellent coffee he had made and the apple pie, and I hope I’m not overstating what I understood him to say.)

The city apparently is aware of his ideas. Contreras showed me photos of him, his wife Linda Roblero (an engineer by profession), and city officials looking over the place together. Will anything come of it? The word from Chris Bailey, whose operations department has control of the property, was this: “We are working to develop new options for the building but nothing solid has happened yet.”

So stay tuned. And pay a visit to Alex at his shop. He’s usually there from 7 in the morning to 9 at night. (hh) 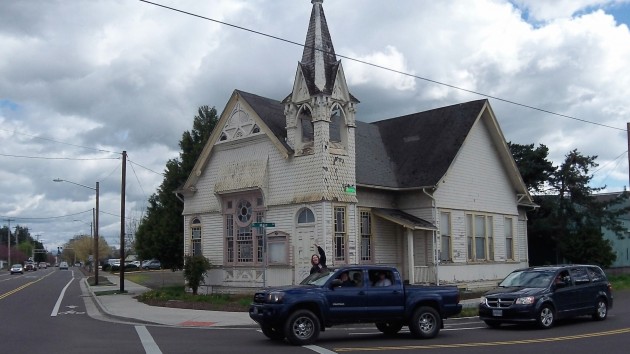 Photographing the old church seems to have prompted an enthusiastic response.

7 responses to “One man’s big ideas for old church”