On this island, you’re surrounded by cars 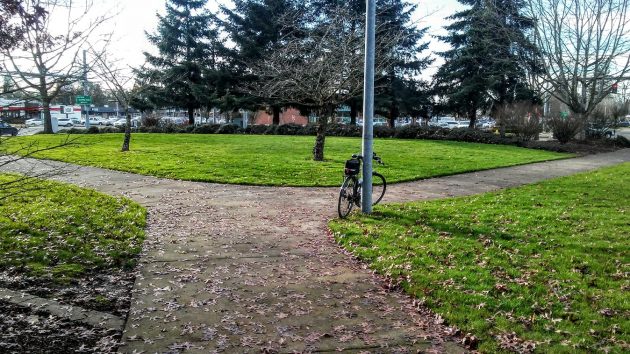 It looks kind of like a park but is surrounded by the constant flow of traffic.

With time on my hands, it occurred to me today that there was a place in Albany where I could not recall ever having been.

Actually there are lots of Albany locations I have never visited. This one, though, I have seen twice a day as I was driving by — going and coming — almost every day since it was completed in 1998. But I had never actually set foot there.

I’m talking, of course, of the nicely landscaped traffic island in the middle of the Big Y formed by Pacific Boulevard and Santiam Highway, also known as southeast Albany’s Bermuda Triangle.

So, today, the bike took me there, as you can see:

There’s nothing to see there, except the landscaping and the concrete walkways. The noise reminds you that you’re never more than a few feet away from traffic.

ODOT has come in for a good deal of ribbing over the years for the design of this complex intersection. But what else could they have done? They had to accommodate traffic on two busy highways, one of which had to be turned into a couplet in order to meet traffic demand. And then there was busy Geary Street cutting through the middle of it.

You have to admit that even though it looks like the work of Rube Goldberg, especially on a map or from the air, on the ground it works pretty well. Its nickname notwithstanding, no one has yet driven into the Y without finding his way out.

Unless they went on the island on foot or on a bike and got lost in the woods. (hh)

11 responses to “On this island, you’re surrounded by cars”