On the Willamette’s dry banks

Despite the showers of the last few days, the Willamette River is still running very low after a summer of almost no rain. Nevertheless it’s a pretty substantial stream, as a stroll on the bank at Albany’s Bryant Park shows.

I stopped at the park on a bike ride at the end of the day Friday. Checking online later, I see that the river has been running at barely above two feet on the Albany gauge. A very slight uptick was predicted for the next 24 hours, but beyond that the forecast is pretty steady at 2 feet or just above. At that level the flow is about 3,600 cubic feet per second.

The Albany gauge, on the right bank just upstream of the Ellsworth Street bridge, is run by the U.S. Geological Survey, which sends someone by every few weeks, presumably to maintain it.

Unlike Corvallis and some other river towns up and down the valley, Albany does not depend on the Willamette for its water source, relying on the Santiam River system instead. So while the unusually low flow is of interest and concern, for Albany it’s not a question of survival just yet. (hh) 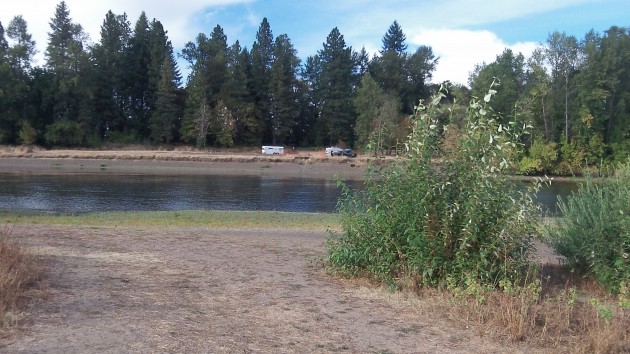 Looking across the Willamette River from Bryant Park on the Friday before Labor Day.


One response to “On the Willamette’s dry banks”