On the coast: No worry about warming 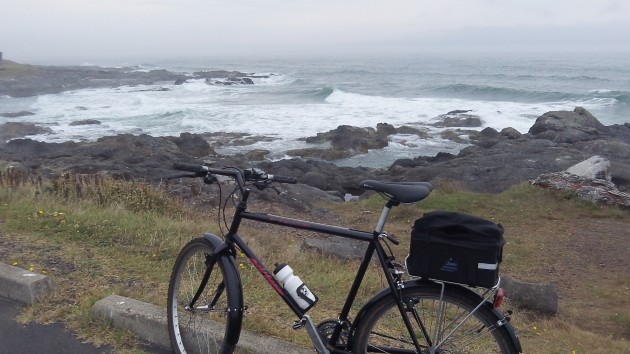 On the cool coast near Yachats, where global warming makes frequent exceptions.

Hoping to slow down global climate change, the Obama administration is pushing ahead with its crackdown on power plants that burn fossil fuels. If it wasn’t so expensive to consumers and harmful to the economy, this would be amusing to watch, especially from the vantage point of the Oregon coast.

In the valley a couple of heat waves have set new temperature records this summer, lending emphasis to the persistent talk of global warming. But on a mid-summer bike ride along the coastline Sunday, it was in the 50s and most of the people I saw on the beach wore some kind of jackets.

At mid-afternoon, the Weather Service reading for Florence was 57 degrees and fog. The climate may be warming in various parts around the world, but the weather gods responsible for the Oregon coast did not seem to get the memo.

Getting back from my ride, more or less chilled, I turned on the heat. That prompted me to look up the website of the Central Lincoln People’s Utility District, which reported the regrettable news that the PUD’s board had approved a rate increase that will increase the average customer’s bill about 7 percent starting this month.

As it happens, the district’s biggest cost, about 60 percent, is power supplied by the Bonneville Power Administration, which plans to boost its prices almost 7 percent this fall. With that expected increase, BPA wll have raised its prices nearly 29 percent since 2010, according to the PUD. And that’s without having any coal-burning generating stations that need to worry about Obama’s crackdown on carbon emissions.

Relying mostly on hydropower, the BPA does have to worry about salmon, environmentalists and the federal courts, not to mention droughts that reduce the mighty Columbia River to something less mighty. Which reminds us that in what we pay for power, regardless from what source or supplier, there’s no escaping worsening trends. If the climate doesn’t get us, Obama and his carbon regulators will. (hh)


11 responses to “On the coast: No worry about warming”