On the coast, a landmark is gone 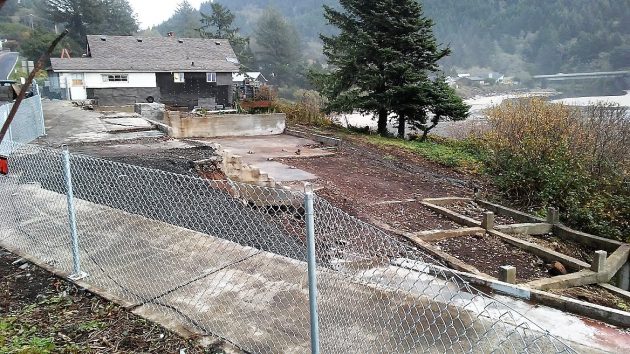 If they haven’t been to the central coast for a month and go there now, Albany visitors will discover that a landmark, the building housing the former Landmark restaurant in Yachats, has disappeared.

The place used to overlook the estuary of the Yachats River and a good slice of the Pacific Ocean. It had been closed since 2010 and was looking increasingly decrepit. And on Oct. 8, I learned from the monthly newsletter of the city of Yachats, the ramshackle structure was torn down.

“A bit of Yachats history left us,” Mary Crook of the Little Log Church & Museum in Yachats observed. It was her article in the newsletter that was pointed out to me. “Townspeople were not surprised that the old Landmark restaurant would be demolished,” she wrote, “but I’m sure a lot of folks felt a pang of sorrow when the wrecking ball finally took the building down.”

A pang of sorrow maybe. But unlike in Albany, no landmarks commission to stand in the way. No public hearings on preserving or razing a landmark. And, apparently, no land use litigation as a result.

In Oregon, where everything old and the least bit picturesque runs the risk of being labeled “historic,” and especially on the coast, this building might have had a legitimate claim.

A restaurant occupied that spot since 1911, “first as a cookhouse for a small band of settlers, then as a tiny cafe sitting beside the dirt road that ended at the river a quarter of a mile south,” the Landmark said on its website when it was still a going concern in 2006.

After the coast highway was completed in 1934, Beulah Swigert came down from Portland and took over the place, called it the Sea View, and started making it famous for excellent home cooking.

After her death in 1959, new owners expanded the property, by then Beulah’s Sea View Inn and On the Rocks Lounge. The lounge drew big-name entertainers such as, according to the website, the Drifters and the Coasters. It didn’t become the Landmark until 1989.

Anyway, this former hot spot on the coast has been dead for eight years. Now the corpse has been cleared away. The site has been cleaned up. It looks like the adjoining structure to the south, a dwelling and a former Lions Club thrift shop, are being fixed up. A carpenter was working on the exterior last week.

Because of the view, I hope something useful and accessible to the public will eventually take the place of the restaurant itself. But there’s no word if that’s the plan. (hh)


4 responses to “On the coast, a landmark is gone”