On the Clark Path, a change is coming 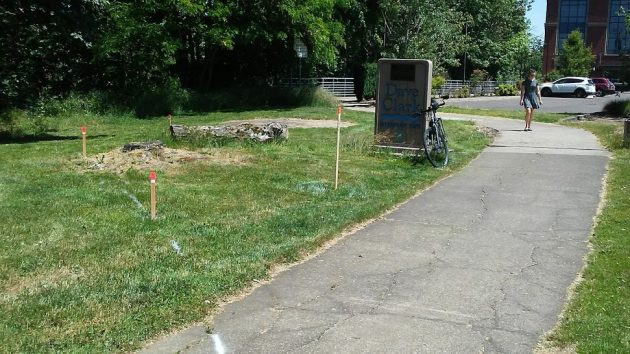 Paint on the ground on June 10 shows the new alignment of fiber optic cable at the Dave Clark Path.

Users of Albany’s riverfront Dave Clark Path will see a change in the popular route with the construction of a sewer pump station over the next few months.

The city council tonight (June 12) is scheduled to award a contract of about $7.2 million for the sewer job to Pacific Excavation. The Eugene company submitted the lowest of six bids.

The project will build a new sewer main to take the load off the Riverfront Interceptor during heavy rains, eliminating occasional overflows to the Willamette River.

The underground pump will be built where the walking and cycling path makes a curve on the western end of the Wheelhouse parking lot. Nearby, there will be a  shed to house electrical gear to run the pump. From there, the new main will run for 7,100 feet east, mostly along Water Avenue, to the wastewater treatment plant.

There are markings on the ground near the pump construction site, showing where underground cable will be rerouted. The path will follow roughly the same route. But once the work starts, it may be a while before the path in that vicinity is passable again. The city contract calls for the sewer project to be completed in January 2020. (hh)

One response to “On the Clark Path, a change is coming”