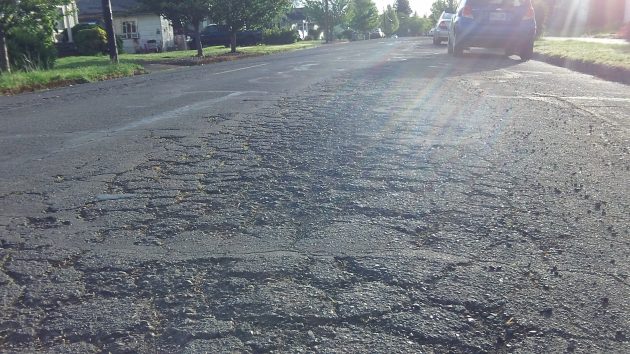 Twelfth Avenue is one of the streets where the pavement has been breaking up.

Whether Albany should ask voters to enact a local gas tax to pay for street repairs is a question that has been hanging around for a while. And now, for the first time in years, the city council will take it up next month.

On Wednesday, Mayor Sharon Konopa asked the city staff to prepare estimates of what a local gas tax would yield in revenue, and to present the information to the council at the work session scheduled for July 11. She  also asked for a priority list of streets where the added revenue would make repairs possible.

As it happens, the city staff has already done some rough estimates. Based on the experience of other cities with local fuel taxes, Albany could expect to take in about a $1 million a year from a 5-cent tax, or about $750,000 from a 3-cent tax. Konopa has been talking in terms of a 5-cent tax, which voters would be asked to approve in the Nov. 8 general election. A decision to place it on the ballot would come in August.

In the 2016-17 budget year, which starts July 1, Albany expects to receive about $2.9 million as its share of the state fuel tax of 30 cents a gallon. City officials say that amount is not nearly enough to take care of the many older residential streets where the pavement is in bad shape.

Konopa has been arguing that now, while gas prices are still relatively low compared to a few years ago, is the time to win approval of a small local tax. For most people, the addition of a few cents would hardly be noticeable amid the routine fluctuations in the price per gallon over time, or in the spread of prices among different stations.

Two Oregon counties, Multnomah and Washington, have local gas taxes, and so do 15 cities. The biggest is Eugene, with a 5-cent tax. In the May primary, Portland voters approved a four-year program calling for a 10-cent local gas tax. (hh)