Old stamps and what they teach 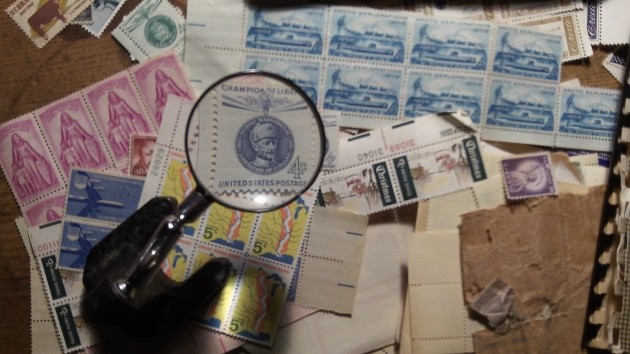 This is going to take a lot of sorting through.

Ever heard of Gustaf Mannerheim? Me either. Not, that is, until I started wading through an unorganized pile of loose stamps left behind years ago by my wife’s late uncle. And the moral is: We could learn a lot from stamps, if only we still mailed each other letters and bought the commemorative stamps I assume the post office still puts out.

The stamps I’m looking through are mostly from the thirties through the sixties. And most celebrate an American anniversary, achievement or other landmark date. Here, for example, is an 8-cent stamp dedicated to “Progress in Electronics.” It pictures a circuit board with the caption “Transistors.”

Others pass on wisdom from the founders. “Observe good faith and justice toward all nations,” one quotes G. Washington. Another attributes to Ben Franklin this: “Fear to do ill, and you need fear Nought else.”

Don’t remember much about the Mormons? A 3-cent Utah centennial stamp from 1947 may cause you to look it up, as it did me. “This is the place,” the stamp says, and the man who said it was Brigham Young, pictured on the stamp with his wagon when he first saw the Salt Lake Valley.

The old stamps before me have plenty of other info. Football started in1869, the American Bar Association in 1878. The Battle of Gettysburg took place 100 years before a 5-cent stamp reminded people in 1963. And so forth.

I was puzzled by two stamps issued by Spanish Guinea in Africa in 1959. Both picture bicycle racers, one crossing the finish line and waving. If anyone can fill me in on 1950s-era cyclists from what now is Equatorial Guinea, I’d appreciate an email.

So what about that Mannerheim fellow? The 4-cent U.S. stamp in the pile has a picture of him in a fur cap and calls him “champion of liberty.” Google made it easy to learn more. He was born in 1867 in Finland when it was part of imperial Russia and died in 1951. He served in the Russian Army as a young officer, returned to Finland after the 1917 revolution, then led the Finns in fighting the Soviets before and during the Second Wold War and, having lost to superior numbers, negotiated a peace deal with the Soviets that preserved Finland as an independent nation. Quite a guy.

There’s a lot to be said for email, obviously. The downside is that it comes with no interesting stamps. (hh)


8 responses to “Old stamps and what they teach”