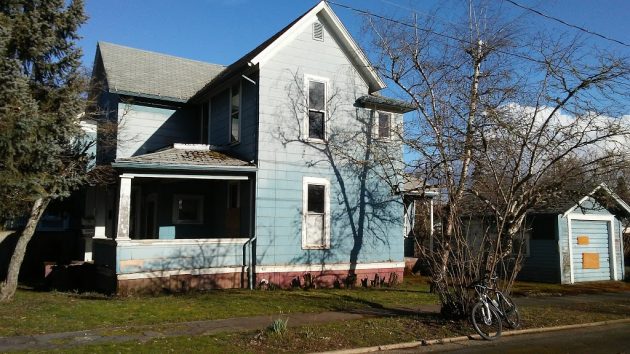 The vacant house at 732 S.W. Fourth in the sunshine of Tuesday afternoon.

What’s likely to happen with this vacant old house in Albany’s Monteith Historic District now is a little clearer after the subject came up before the city council Wednesday night.

The house is in pretty poor shape and had been the target of city enforcement action for the past several years. The city of Albany has more than $85,000 in municipal liens against it, almost all of it in unpaid fines and interest against the former owners, a mortgage company, for keeping a derelict property.

The address, 732 Fourth Ave. S.W., is one of several properties listed on a semiannual report on code enforcement actions that went to the council Wednesday. Councilman Dick Olsen asked about the house, and he and the city staff talked about it briefly.

The Federal National Mortgage Association (Fannie Mae) owns the property. A deed on file at the courthouse says Fannie Mae bought the place on Dec. 17 for $155,000.

Fannie Mae is working with Coldwell Banker real estate, the council was told. Somebody with Fannie Mae in Denver has also tried to reach City Attorney Sean Kidd about getting the city liens reduced. So far they haven’t connected,  though. For cleanup work at the site, the city is owed $2,753. The rest of the roughly $85,000 total the city says it is owed consists of fines and interest.

Eventually, once the liens are settled or negotiated down, Fannie Mae presumably will try to sell the property, probably as is.

The house, dating from the 1880s or 1891 depending on the source, needs extensive repairs inside and out. The city attorney told the council that exterior work would require approval of the city Landmarks Advisory Commission.

The house has a pretty neat shape and no doubt would be a boon to the neighborhood, rather than a blight, if somebody could find it worthwhile to buy and restore it as a single-family residence, the way some nearby homes have been restored in recent years. (hh)


9 responses to “Old house talked about at council meet”