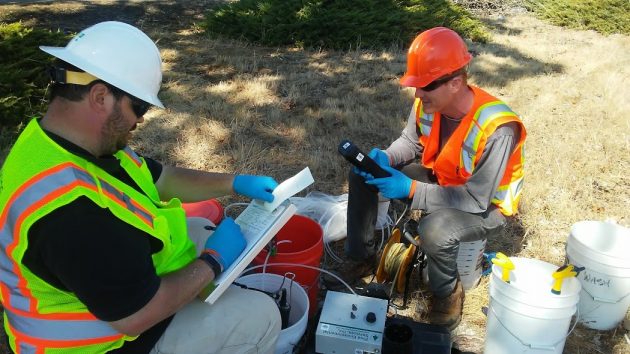 A flurry of Facebook chatter in late August has prompted Albany city officials to take note of a former gas station site on Southeast Pacific Boulevard. Mayor Sharon Konopa says she would like the property better maintained or redeveloped.

The Facebook entries on “What’s Up Albany” complained that the site was an eyesore, and Konopa responded online that she would look into the situation. On Monday, I understand though I wasn’t there, the topic came up during a city council executive session. (The law allows such meetings, from which the public is barred, for a number of purposes including real estate transactions involving the public body. It’s not clear why an executive session was held on this issue, unless the city considers buying the site.)

The place was the site of a convenience store and gas station — Arco, most recently — that closed in the 1990s. The building sat vacant until, at the city council’s urging, BP demolished it in December 2012.

Compared to some other unused properties in Albany, the site lately has hardly been a big eyesore. Public attention may have been drawn to it again after the opening this summer of the big-box WinCo grocery nearby.

I asked the mayor what she could tell me about her concerns and the council discussion. “After the Facebook post,” she replied,”our code enforcement contacted the management company for the property and they were going to fix the fence. However I would like to see a permanent solution for getting that site better managed or redeveloped. How is for future discussions.”

Assistant City Manager Jorge Salinas told me Kris Schenkel, a code compliance officer with the police department, will keep checking on the property to see that it’s maintained. Salinas also thought someone would check with adjacent property owners to “gauge their interest in the property.”

I rode my bike past the place on Thursday. There I talked with two men working for Arcadis, a company with many branches including one that deals with contaminated sites. Carl (who wouldn’t give me his last name) and Tucker Thiesing had a probe sunk into a monitoring well on one side of the property and were taking readings of contamination under ground.

I apologized for barging in and interrupting their work. “Oh no,” Thiesing deadpanned, “now our data’s all wrong.” (hh) 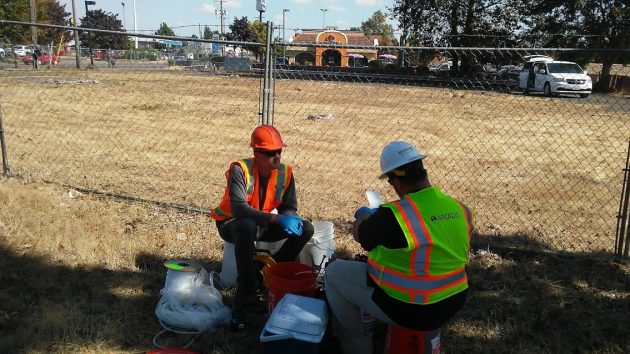 Stretching out behind the data collectors, the BP site looks well mowed and cleaned up.