A reader’s strong reaction is below. 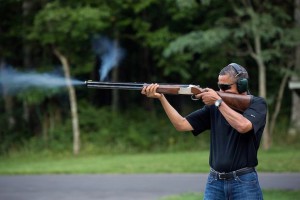 Obama would be more believable in his quest for more gun control if he made some sort of sense. In Minneapolis on Monday, he once again said he wanted to prevent another Newtown and the way to do this was to require “universal background checks” and to ban “assault rifles” and high-capacity magazines. But if those changes had been law in December, they would have had no effect on what happened in Newtown.

Universal background checks don’t affect anyone who has not previously and officially been logged as a criminal or recorded as being mentally ill. Banning certain rifles and magazines has no effect unless the government takes the next step, which is to track down and confiscate all the millions of rifles and magazines that it has banned. And even if it did so and succeeded, it would not prevent massacres of innocent people in defenseless institutions such as schools. Would-be mass killers would instead grab a shotgun loaded with three or four shells — perhaps one similar to the one that skeet shooter Obama likes to use at Camp David — which could easily have the same devastating result in a crowded classroom or shopping arcade as an AR-15 or even a .22 caliber pistol. (Such a pistol was used in a mass school shooting in Finland a few years ago.)

So when Obama reiterated his talking points in Minneapolis — before a backdrop of dozens of uniformed police officers apparently willing to be lined up as props to lend his words gravity — he failed to persuade anyone who thought about exactly what he was saying, no matter how earnest he tried to appear. What he’s pushing for would not achieve what he says he wants. (hh)

From Traci O’Hearn: If you honestly think that the Newtown murders would have a similar outcome if the shooter had a .22 caliber pistol or a loaded shotgun with three or four shells then you are an idiot.  One child was shot 11 times.  How long do you think it would take to shoot a child 11 times and then move on to shoot the next 19 people.
I do not know how I feel about banning certain guns, but I do know that there is something better we can do as Americans.  Mentally ill people should not be able to carry a gun.  It won’t solve the country’s problems 100 percent, but it may save some lives.
Yes, I have a concealed wepons permit.  Yes, I feel comfortable sitting next to my dad when he has a gun tucked into his belt.  But I know someone who I don’t think should have access to a gun. She has a mental illness, diagnosed by a doctor. Can she get a permit to carry? Yes she can. ou are dead wrong if you think her having a gun is safe for anyone.  All she has to do is fill out her paperwork and check the box that says she doesn’t have a mental illness and her permit will be mailed to her. She doesn’t always think she does have a mental illness.  There is the loop hole that needs to be fixed.  I don’t know how or if it can be fixed, but for our sake and the sake of our children I wish YOU would stop mocking OUR President for trying to change something.  Mocking him because he values hunters and their rights or cutting him down because he knows the need to have some sort of restriction is just wrong.  I’ve even seen on Facebook this week (more than once) people threatening to kill the president if he tries to ban assault weapons or impose restrictions.  Are YOU telling me those same people have a right to carry a weapon? Just think about that for one moment.
I’m sure you won’t print this, probably won’t read it, but I wish you would step outside of your narrow mind for one moment and realize that not everyone agrees with you mocking OUR president. Not today!