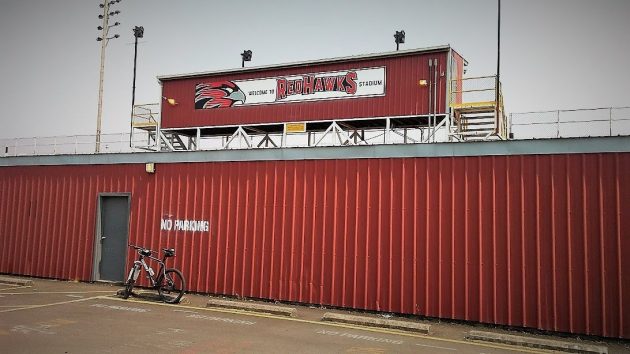 You’re looking at the back of the press box at RedHawks Stadium, the renamed athletic field of South Albany High School.

In terms of outdoor signage, the high school’s rebranding is almost complete. I’ve been going past the football field from time to time on the bike, hoping to catch them replacing the big “Rebels” lettering. Missed it, though. The new name was up when I got by there on Wednesday afternoon.

Wondering what the name change is costing? School district Business Director Russ Allen gave me an update earlier this month.

“Between the football field, the basketball court, uniforms, and other school-specific rebranding,” he wrote, “I estimate the total price tag to be $150,000.”

There had been cash donations of $7,000 from Tonja Everest, the former assistant superintendent of Greater Albany Public Schools, and $1,250 from Hewlett Packard.

In addition, Allen said, the turf company is working at cost to update the lettering on the field, and a company has made an anonymous donation with a value to the district of about $30,000.

On the football field, the north end zone already says “South Albany.” At the south end, according to Allen, “Rebels” will be replaced by Sept. 1. (hh) 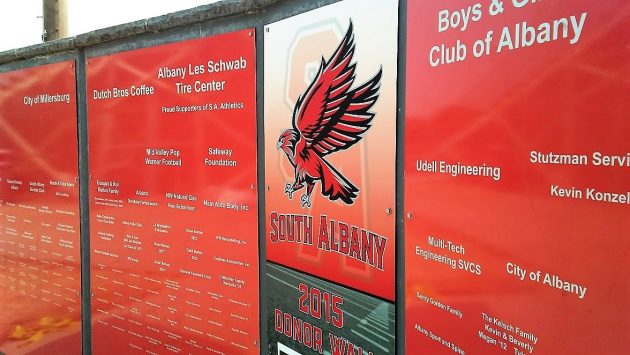 South’s new RedHawks mascot spreads its wings on the donor wall near the football field.