Not good enough? But it works 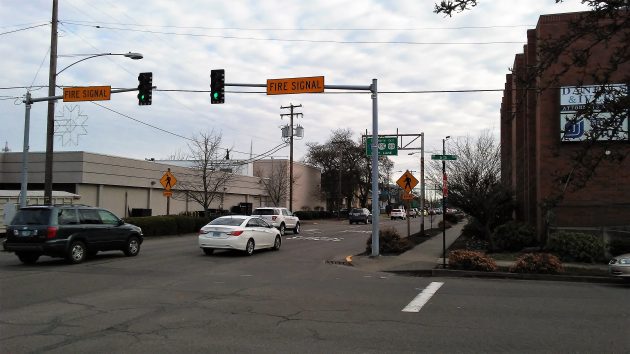 No fire trucks are coming, so the fire signal gives Ellsworth Street traffic the green light.

This, in case you can’t tell, is the intersection of Ellsworth Street and Sixth Avenue in Albany. It’s also the scene of what is shaping up as a big waste of public money.

See those fire signals up there? They tell traffic on Ellsworth that it’s OK to keep going across Sixth. When, on the other hand, fire trucks come barreling along on Sixth from the main fire station one block away on Lyon, the lights turn red. Works great. But now, city officials say, they have been told by ODOT that those lights and posts no longer meet standards and must be replaced when the sidewalks get a new “streetscape” treatment later this year.

“ODOT has indicated to staff that when the curbs are modified with the downtown streetscape project, the existing poles and mast arms will need to be removed and upgraded,” City Engineer Staci Belcastro wrote in a memo to the downtown urban renewal board last week. On Monday the city council got the same message.

One alternative is a “sign bridge” equipped with flashing yellow lights. The estimate for this runs around $200,000. This would be money down the drain because flashing yellow lights don’t stop traffic. For that reason, the fire department would prefer a traffic signal there, one that would be activated when trucks respond to an alarm, as now. The cost of that would be greater yet.

Actually, the fire department would be happy just to leave things as they are. But ODOT, as I understand it, does not like the present signal because while it stops Ellsworth traffic when activated, eastbound drivers on Sixth see no signal at all and might pull right into a fire engine turning left on Ellsworth. Evidently somebody forgot that drivers facing east on Sixth would look straight into a fire truck screaming their way with lights and sirens. If they can ignore that, a red signal won’t stop them.

The city staff will explore all this some more with the state traffic engineer, who has jurisdiction because Ellsworth is part of Highway 20. But if the present fire signal is not good enough, even though it works, the public is looking at spending either $200,000 for flashers on a sign bridge that do nothing, or spending even more for a traffic signal that would work no better than what already exists. (hh)


10 responses to “Not good enough? But it works”