No stars at night: Too much light 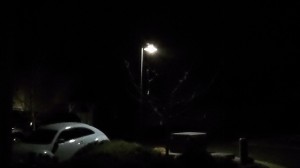 A “dark sky” fixture in action.

Ever wish you could see the stars at night without having to travel into the wilderness? Especially the Milky Way, in all its awe-inspiring splendor?

In most of our towns, you can’t do that even when it’s not overcast because the night is not really dark. There is light all over the place — from street lighs, yard lights, motion sensor lights, porch lights and so forth.
In Bandon, on the coast, the city council wanted to do something about that. Last year it passed an ordinance requiring new installations to use so-called “dark sky” fixtures. These are fixtures that cast their light downward, so as not to spill over onto nearby property. But citizens in the town didn’t like it. Too much regulation, was the prevailing sentiment, according to a report in the Coos Bay World. So they referred the lighting ordinance to the voters, and the other day, the voters rejected it by a vote of 524 to 419.
I can see their point about too much regulation. And in any case, “dark sky” fixtures probably wouldn’t have helped much anyway. The problem is not so much that outdoor lights shine outward or upward. It’s that they are there at all.
A lighted world may be a safer world, and that’s a good thing. But as for seeing the Milky Way on a summer night, many of us, living in towns or suburbs, now have to rely on our memory of being outdoors at night when were little kids, many decades ago. (hh)
Ted Salmons: Sadly though, light pollution (I never liked that term) is a price people pay for the convenience of safer streets, close neighbors, common protective services i.e. police and fire departments and the like. Growing up in a small Eastern Kentucky town I remember laying out at night just enjoying the night skies. The occasional shooting star or seeing an orbiting satellite were part of the summer fun. We didn’t have cable and electronic games back then and we were better off for it.  But by the way the population is dispersed in our country it’s very clear that most people are willing to trade off the beauty of a dark evening sky for the well lit Burger King down the street. There are now several generations of large inner city dwellers that have no idea of the vastness of the stars on a clear, dark, country night.  And they are lesser beings because of that.  No insult meant, just in my opinion.
Posted in: Commentary
Tags: Bandon, dark sky, light pollution