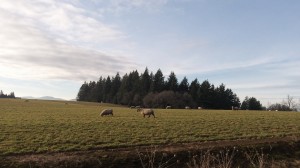 Sheep in an open field have more privacy than users of social media.

We should be troubled by the government’s sweeping up and storing of everybody’s telephone records, but not too much. The data are so massive that there’s no realistic chance that anyone’s privacy is being compromised. Keep in mind that the data exist whether or not the government stores them. Phone companies use them for billing. Internet companies, more intrusive than the government, scan the content of communications and then use information about their users to make money.

All the National Security Agency is doing — as far as we know — is preserving records of calls being made so that, if some terror suspect emerges some time later, it is possible to reconstruct his contacts. Whether this actually works is doubtful. Federal Judge Richard Leon in Washington, D.C., who found that the program likely violates the Constitution, said the government could not show that it had worked in a single case.

Another federal judge, though, William H. Pauley III in New York City, upheld the program and implied that it does work. “This blunt tool,” Pauley said, “only works because it collects everything.”

Collecting data on every call made — and presumably on every email sent as well — is a form of privacy protection. We can take comfort in the knowledge with that much data being stored, the anonymity of individual bits of routine information is virtually assured.

We should be more worried about the content-scanning by companies like Facebook and Google. If personal privacy is a thing of the past, we can blame the providers of social media and their users, meaning ourselves. (hh)