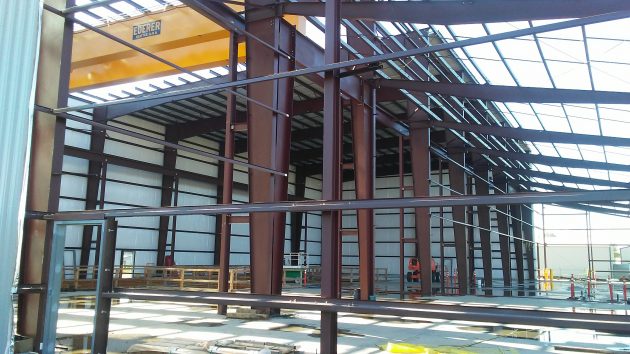 The Stack HIP building under construction on Southeast Marion Street as it looked this afternoon.

A confidential deal tentatively approved by the Albany City Council in February now has become public: It’s a proposed city loan of $745,000 to the company that is building a high-pressure furnace for the special-metals industry.

The council discussed the deal an executive session closed to the public on Feb. 25. Then, without explanation of what it was talking about or wanted to do, it voted 6-0 “to direct staff to develop a proposal for Stack Metallurgical.” There had been no explanation since then either — until now.

The agenda for next Wednesday’s council meeting came out Friday. One item calls for the council to act on a seven-year, $745,000 loan to Stack Metallurgical. The annual interest rate is 2.5 percent with a balloon payment at year seven.

Stack Metallurgical is a Portland company that bought two parcels of industrial land on southeast Marion Street and hired Gerding Builders to construct a huge pit and a structure above it to house an HIP furnace. HIP stands for “hot isostatic pressing.” This is a method that uses argon gas to subject metal to pressures as high as 29,000 pounds per square inch at temperatures up to 2,280 degrees F, a process said to be important to the future of the Albany metals industry.

The proposed council resolution approving the loan says the “special metals industry is a critical job and wage sector for our community; … Stack HIP provides a key service to strengthen the special metals sector; and … Stack HIP requested help in financing a second structure to support a second HIP machine.”

John Pascone, president of the Albany-Millersburg Economic Development Corp., told the council earlier this year that Stack was investing nearly $30 million in the Albany installation, including $20 million to purchase an HIP machine from its manufacturer in Sweden.

But it’s a loan, so the money should come back over time, the same as other investments the city has made with some of the Pepsi cash. (hh)