No gun grabbers these 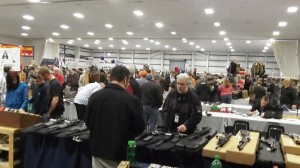 Checking the merchandise at an Albany gun show.

It took a while — a month, actually — but Congressman Kurt Schrader has given me a response to questions about what kind of gun control measures he would support. In short, he seems to agree with Congressman Peter DeFazio, who said in a letter in February he doubted the U.S. House would consider bans on so-called assault rifles or high-capacity magazines. Instead, DeFazio wrote then, the House might go along if the Senate passes something on the mental health front and background checks of the kind Oregon already has.

I had asked both DeFazio and Schrader about this in mid-February. Both are Democrats and represent different parts of the mid-valley. Schrader’s reply arrived by email Thursday.

“As a lifelong supporter of responsible gun ownership,” Schrader wrote, “I want effective reforms that respect the Second Amendment and American traditions. There is a responsible middle road between aggressive bans and inaction which any final piece of legislation must take.”

He said he supports three items: Background checks at gun shows like Oregon’s; incentives for properly securing firearms against unlawful access; and better funding for law enforcement and mental health services. DeFazio had said pretty much the same thing. Would-be gun grabbers these two Oregon Democrats are not. (hh)