Ninth and Oak: Making use of old radio station 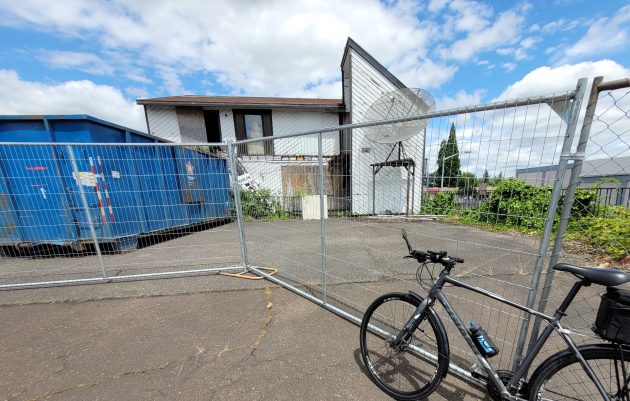 Construction fencing surrounds the ruin of the former radio station at 1207 Ninth St. S.E. on July 7.

The building at Oak Street and Ninth Avenue in Albany, which formerly housed KRKT and then other radio stations, has sat empty for years. Now the dilapidated structure is about to be revived.

A construction fence went up around the building at 1207 Oak St. S.E. in the last couple of days, and today the demolition part of the remodeling looked ready to start.

Albany insurance agent Ron Brockman has owned the property for about seven years. He originally had the idea of rebuilding it as “transitional housing,” but that fell through.

Now he is ready to turn the building into an office for his business, RBI Insurance. The office used to be housed on Pacific Bloulevard nearby and then moved to temporary quarters on Queen Avenue while preparations for the remodeling were being made.

The renovation of 1207 Ninth calls for removing the second story. On the ground floor there are to be various improvements including new siding, additional windows, and updated insulation. Albany architect Christina Larson’s firm, Varitone, did the design.

Integrity Construction and Home Remodeling will do the work, Brockman told me.

Making the site usable was a challenge because there wasn’t enough room to accommodate city requirements. The problem was solved when the city council agreed, in July 2021,  to sell Brockman a sliver of surplus land along his Oak Street frontage for $1,897.75. This will allow an exit from the site on Oak. The entry will be from Ninth.

The city building permit for the remodeling puts the value of the project at $625,000. That appears to be an exaggeration. Brockman told me his budget is about half that amount. (hh)

On July 4, the building was not yet surrounded by fencing. Ninth Avenue, looking east, is at right.


3 responses to “Ninth and Oak: Making use of old radio station”