Next up for regulation: Food carts 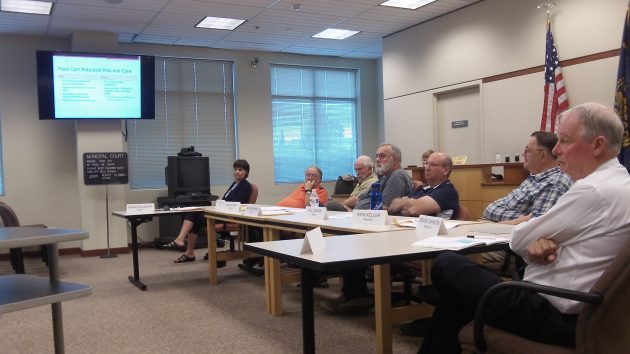 Food carts in Albany may be facing additional regulations once the city council gets through with them.

At its work session Monday, the council agreed to consider what the city staff calls “minor revisions” in city rules affecting, apparently, everything from hot dog vendors to semi-permanent food trailers set up in vacant lots.

Councilman Rich Kellum raised the subject of food-cart competition with brick-and-mortar restaurants some weeks ago, and the council agreed to see what might be done. On Monday, Planning Manager Bob Richardson laid out some issues and possible approaches.

In the end, council members nodded their assent to a set of revisions they would be willing to consider. They include shorter limits on the length of time food carts are permitted in any one spot, and requiring carts be set up on paved surfaces and be equipped with approved methods of food, grease and oil disposal. The city now permits temporary food carts for 30 days, others for 120 days, and still others permanently if they go through the standard site plan procedure.

Enacting new rules requires a public process that may take 18-24 months, according to Richardson.

Kellum drove he discussion. He said a new restaurant at Elm and Queen, Juicy Burger, has closed again and the owner blamed competition from a food cart. In Kellum’s view, it’s unfair for the city to impose on regular restaurants fees and site requirements, such as sufficient parking, that food cart operators can avoid.

A map shown by Richardson had one long-term food cart in operation in the city along with a handful of others, but some of the others were temporary and may already be gone. (hh)


8 responses to “Next up for regulation: Food carts”