Next flood: Gates on Bryant Way 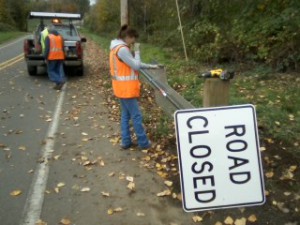 A county crew was working on Bryant Way Monday.

Next time high water sloshes across Bryant Way outside of Albany, it should be easier to keep drivers from getting into trouble there. Linn County Road Department crews on Monday were installing gates that can be closed to keep traffic out.

The trouble comes in winter and early spring when exceptionally heavy rain or a sudden snow melt in the Cascades floods both the Calapooia and Willamette rivers. Then the Calapooia spills over and one arm of it takes a shortcut across Bryant Way less than a quarter-mile from the Albany city limit.

In January 2012, an 88-year-old man had to be pulled from his submerged vehicle there. And then on April 1, the papers reported that two teenagers had become stranded in high water after apparently walking out into it. They too had to be helped to safety. At least one similar mishap occurred at the same spot in the winter of 1996.

The new barriers won’t keep people out, but they will make it impossible for drivers to ignore the customary warning signs saying the road is closed. There are no residences between the places where the county was placing the gates, so residents won’t be kept from their homes when the water is high.

Roadmaster Darrin Lane says the project is estimated to cost about $2,500 and is a joint venture between the Albany Fire Department and the Linn County Road Department.  He says that gates were also installed on Lochner Road. (hh)