On my ride on New Year’s Day, I looked in on two parts of the Luckiamute state park north of Albany, got encouraging news at one place and, at another, became aware of the need for repairs.

The problem is that the Luckiamute River has chewed into its right bank right next to the road to the parking area in the north section of the park. There was a sign saying the road was closed, and some yellow caution tape blowing in the icy wind. But in fact the road was open, and a couple of cars were parked well beyond it in the parking lot where the trail to the Willamette River starts. 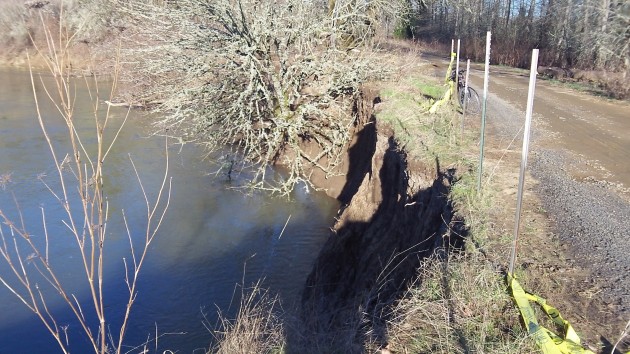 The river has chewed its way very close to the road in this part of the park.

Near the sign, I stopped and took a cautious closer look over the edge of the bank. It appears as though the river was very near to undermining the road itself. I’m guessing that if we have another week of flooding on the Luckiamute, as we did last month, the road will indeed become unsafe, if it stays in place at all. The state parks department will have to move the roadway. That’s what it looks like to me.

I also stopped at the designated paddlers’ access farther north along Buena Vista Road. I was wondering whether 2016 will be the year the department can finally complete its plans for an improved boat launch there.

In the works since at least 2011, the project has been postponed two or three times, most recently to allow time for the state to commission a new design that would be up to the complexities of the site. I’ve wondered whether the parks department was about to give up on this idea and leave the launch as primitive and steep as it is.

But a park ranger happened be to be there Friday, showing a couple of volunteers around. And when I asked him, he told me the project is still in the works and an outside engineering firm would be asked to design the ramp and whatever goes with it. So, fellow canoeists and kayakers, no reason yet to give up hope for easier access to this sweet little stream. (hh) 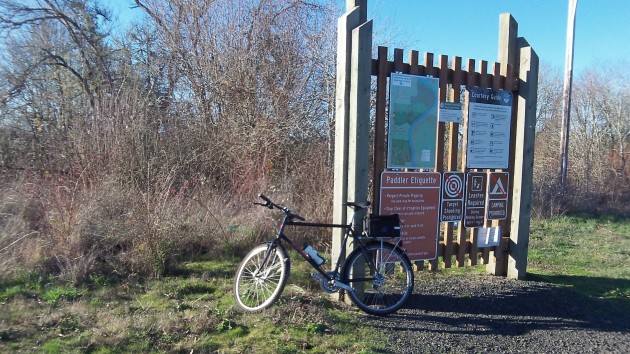 There’s still hope for improvements at this designated boating access to the river. 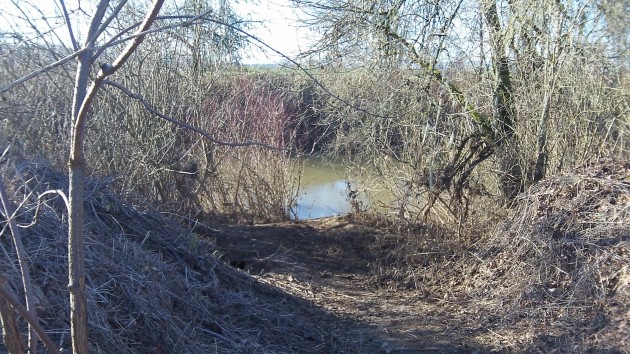 The launch ramp, such as it is, on New Year’s Day.