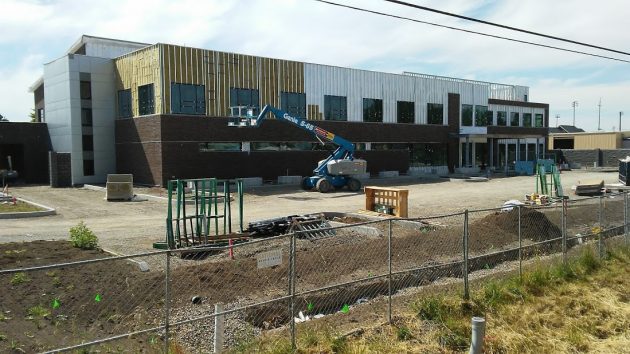 The new police headquarters at 2600 Pacific Blvd. S.W. as it looked on July 7.

Albany’s new police headquarters will have an emergency safety feature that the current station lacks: A lockable vestibule where people can seek help after hours when the public counter is closed.

This came up after Jim Engel, a reader of this site who retired from the Albany police 17 years ago, complained in a letter to the Democrat-Herald that he went to the station after hours to file a form and found the front door locked.

City spokeswoman Marilyn Smith responded that public access to the station’s lobby has been closed after hours for a couple of years now because of staffing and safety concerns. Officers are usually on patrol and only the dispatch center is consistently staffed when the offices are closed.

This made me wonder about this hypothetical scenario: You are driving alone late at night and find yourself pursued by a bad guy, so you lead the chase to the police station, hoping to run inside for protection or help, but find yourself locked out.

I asked police Capt. Jeff Hinrichs about this, and here’s his reply: “Unlike our current building that provides no security for the scenario you outlined…, we incorporated the scenario you describe into the new police department design. The new department has a locking vestibule that will be open 24/7 with signage and the ability for someone inside the vestibule to push an emergency button to lock the exterior door providing them some safety while they communicate with a dispatcher via a dedicated phone.”

The new station — with about 40,000 square feet of interior space and costing about $15.4 million — is expected to be ready in October. In his quarterly report to the community, Chief Mario Lattanzio says that’s a month later than planned, because of weather delays this past winter.

Lattanzio also reported the latest Albany crime stats. While serious crime overall in Albany during the second quarter of 2017 declined slightly from the same period last year, there’s been an increase in some categories including aggravated assault, residential burglary, theft from vehicles, theft generally, and stolen cars. (The numbers are here.)

The department of approximately 100 employees has clearly outgrown the station built in the 1980s for a force half its current size. The new headquarters will take care of that. As for rising crime, Albany residents hope that somehow, the new facilities will help in controlling that as well. (hh)