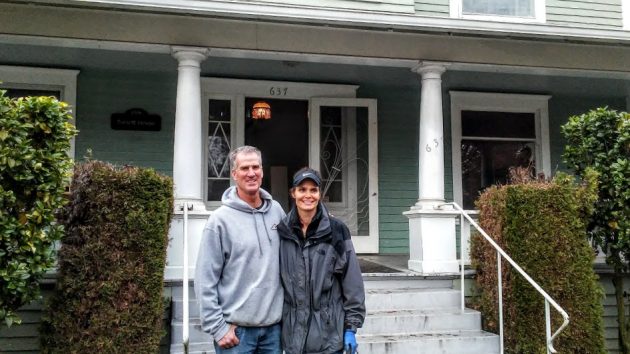 Mark and Tina Siegner in front of the 1909 Barrett House on Friday. They are about to renovate it.

Mark and Tina Siegner have a new project. The Albany home-building couple have bought the Barrett House at 637 Fifth Ave. S.W., in the Monteith Historic District, and are about to start renovating it.

First they had to clean it out, and I happened to go by there Friday as they were finishing with that, trying to give away a lot of old stuff that came with the house, including a washer and drier and an upright piano.

I wrote about the house in June after I had noticed the windows were boarded up and a police department sign was on the door. The sign declared it a derelict property.

More recently the grounds were cleaned up and the plywood was partially gone. And on Friday I stopped when I saw the Siegners at work at the address. That’s when I learned that they bought the property last month.

Among other things they told me the previous owner had to evict somebody occupying the place, and the cops were called when the man staying there fired at a process server with a BB gun.

Built in 1909, this is a magnificent house that’s listed as one of the sights on the self-guided tour of the Monteith Historic District. With two stories and a basement, it measures roughly 3,000 square feet of living space. The Linn County assessor lists its market value at about $270,000 and the sales price last month as $235,000.

The Siegners hope to complete the renovation over the winter and then offer the property for sale.

In the meantime, Mark told me, they are about to receive their architect’s plans for the project they want to build on the northeast corner of Fourth Avenue and Calapooia Street. That’s where, after a prolonged controversy over permitting, the city council allowed them to demolish three derelict and condemned houses in June. They hope to start construction there in the spring.

On Fifth Avenue, they’ll put a new roof on the Barrett House and do major restoration work on the inside. As far as I could tell, no structural or material changes are needed on the exterior. If that’s the case, approval of the Albany Landmarks Commission will not have to be obtained. (hh) 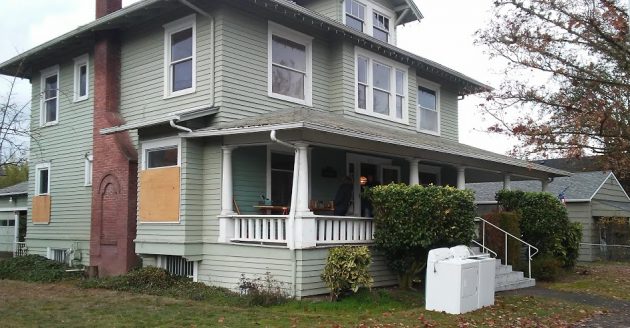 A washer and drier and other old stuff was being hauled out of the Barrett House on Friday.