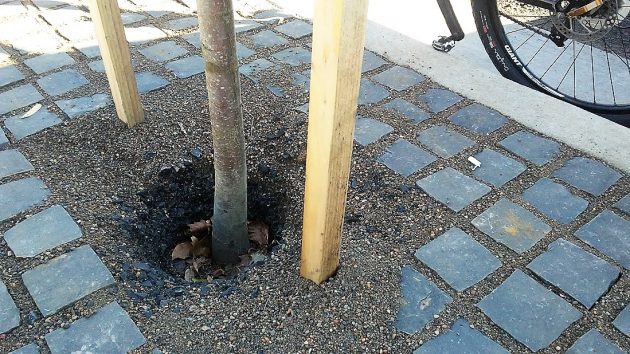 One of the newly planted trees on the north side of Third Avenue last week.

On a walk through the changing streetscape of downtown Albany, I wondered about the holes around the newly planted trees. Then I heard from someone who knows about trees, telling me that these were planted too deep. Turns out they were, and the city says the contractor will make it right.

The email I got came from Dick Conolly, the retired superintendent of Albany parks. “I can’t help but notice how crazy deep the new downtown streets have been planted,” he wrote. “I also realize I am quickly becoming a dinosaur, but I can’t find such deep planting recommended in the literature.”

Conolly referred me to online material of experts explaining how trees should be planted. One of the guidelines: The top of the root ball should be level with the ground.

When I put the question to people involved with the $8.5 million downtown streetscape project, of which the roughly 215 new lindens, zelkovas and other trees are a small part, City Engineer Staci Belcastro replied, “We agree that the trees on Second Avenue were not planted correctly. A couple of weeks ago we notified the general contractor, Emery & Sons, that this was the case. Emery & Sons is working with their subcontractor, who will re-install the trees that were not planted correctly.”

She added that the replanting should be happening fairly soon.

While most of the problem was on Second, Lori Schumacher of Public Works told me some trees on other streets will need to be replanted too.

What’s the big deal about this? Conolly made the point that the benefits of an urban forest come from shade trees over 30 years old, and trees planted too deep have an average life of only seven to 10 years.

If it takes 30 years, some of us won’t be around to enjoy the full benefits of the downtown street trees. But somebody will be. And for their sake, it’s good that this planting will be redone. (hh) 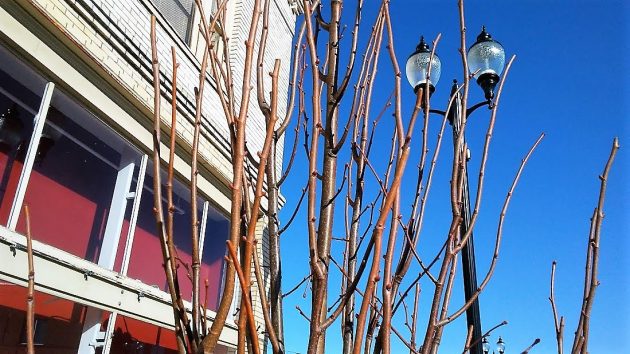 Looks like it won’t be long before this specimen on Third will have leaves.

11 responses to “New city trees: A question of depth”